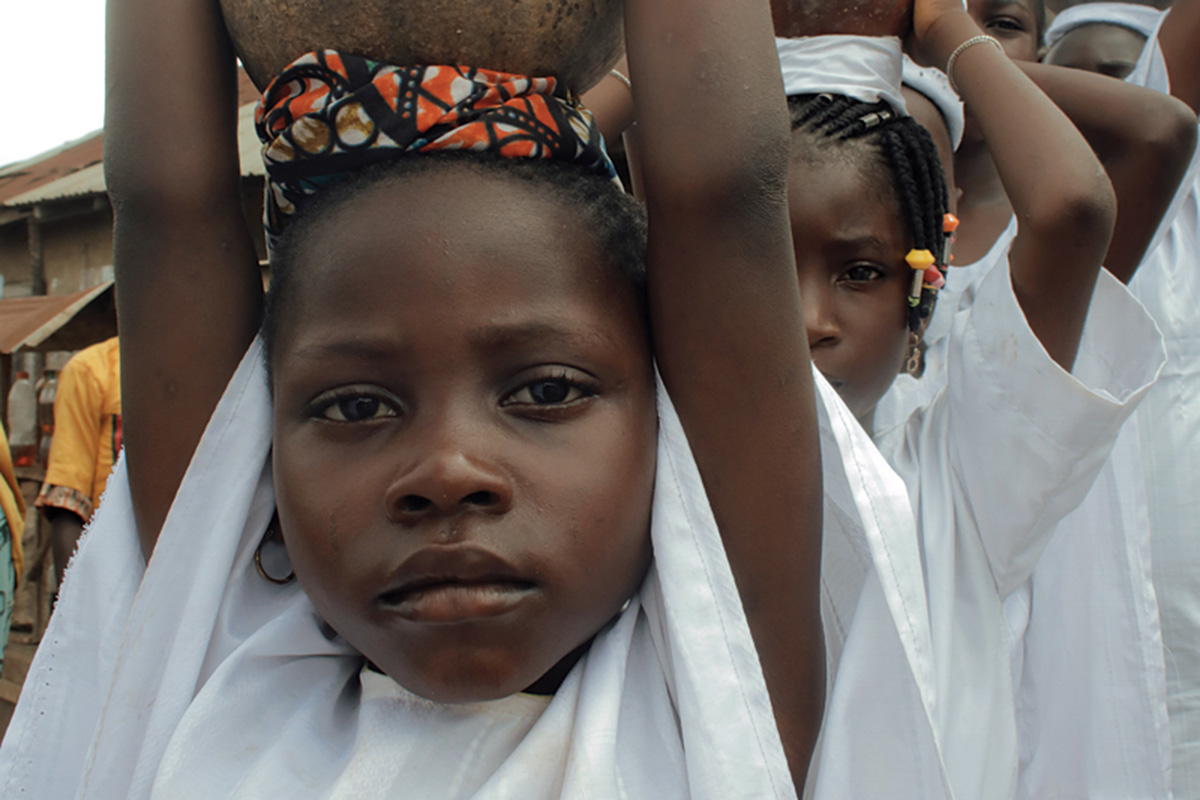 Birmingham-based visual artist, Anthony Shintai Olabayo Amao, recognises this through his latest work Yorubaland, a photo book dedicated to the cultural practices and spiritual beliefs of the Yoruba people of Oyo Town, Nigeria.

An ancestor of the Yoruba tribe himself, the photo book serves as a thoughtful mediation on the identity of the Yoruba people and Anthony’s own identity and spirituality.

After moving to the UK in 2003 and returning only a handful of times since, the creation of Yorubaland marks Anthony’s first solo trip to Nigeria. The trip was planned around the Sángo Festival, a yearly event held by the Yoruba people to honour Sángo, the thunder and fire deity and the third king of the Oyo Empire.

He said his intuition was “telling me this was the time to dive in and explore it firsthand….after learning about the true wonders of the Yoruba Religion, I was driven with a purpose to capture and showcase its beauty to the Yoruba society and to the world.”.

The drive to document Yoruba society is apparent throughout Yorubaland – each portrait and scene is authentic and vibrant. As viewers, it’s clear to see Antony’s precise and respectful nature in documenting scenes of deeply personal connection, as well as wider cultural practices.

The ease with which subjects pose and celebrate their documentation is testament to Anthony’s respect and understanding of his subjects: “[they] naturally felt at ease, most of them saw me talking with the council elders before the celebrations started taking place…they knew I was a trusted photographer. In an environment where you think they’d be wary of the camera, a lot of them were actually asking for their photos to be taken.”

These were moments of cultural exploration and not merely fleeting opportunities captured in one click. The discovery and understanding of his ancestry has been a long, drawn-out processes, culminating with Yorubaland.

Upon his return to Nigeria, Anthony immersed himself in the true history of his ancestors, which has often been marred by a imperialistic, colonial narrative. He describes this process of self-taught discovery and encourages others to take up the process for themselves:

“It’s up to us to learn, unlearn and relearn. We need to challenge what we have been fed to believe as the truth so that this and the next generation can reshape our society for the better.”

The project is his attempt to reconcile these outdated narratives by showcasing the beauty and wonder of the often abandoned traditions of the Yoruba people. In this dedication to his ancestral heritage, Anthony stresses that there needs to be a greater cultural pride within the Yoruba community, “If they [the Yoruba people] understood how much our culture and religion has impacted the world, then they would have a greater appreciation and respect towards it. Our history began before we were colonised.”

Whilst documenting the lives of the Yoruba people, Anthony began to understand the universality of environmental protection and issues that waste management pose to the beauty and preservation of ancestral spaces such as in Oyo Town.

The Yoruba people are positioned in a particularly rural area of Nigeria and there is a significant lack of government infrastructure for ethical ways to depose of plastic waste: “In some parts of the rural areas, the spring water supply can’t be consumed as it’s been heavily polluted, the only way to get clean water to them is by delivering water filled in plastic sachets and plastic bottles and this further contributes to the amount of plastic waste.”

With this in mind, Anthony has released his photo book with all profits being split between the local communities in Oyo Town and the African Clean-Up initiative, a non-government organisation based in Nigeria:

“We are going to clean the streets of the town and reclaim the beauty of the land before it was introduced to plastic from the west. The people of the rural areas are not aware of the danger of plastic to our environment and oceans, we need to share the knowledge which we are discovering over here in the west with them so that they can avoid making the mistakes we have before it’s too late.”

A year after his trip, his experiences are still as vivid and he continues to explore and consider his own understanding of religion and the wider world: “I was born and raised in a Christian household and always thought Christianity was the religion we were meant to follow. I was conditioned to believe and practice this from birth, but after learning about the true wonders of the Yoruba religion I now feel like not everything on the surface is as it appears to be. I now yearn to discover the absolute truth in every aspect of my life and the world around us.”

Despite the end of his work on Yorubaland, Anthony promises to continue in his documentation of beauty and moments of wonder, particularly in his latest project with DanceXchange: “The project is about discovering new methods of creative exchange and investigating what artistic language can be uniquely developed in lockdown….it is bringing together digital artists, dance professionals and young people, from across the West Midlands in a dynamic collaboration.”

Support the Yoruba people and see the photographs in full by purchasing the book directly from Anthony HERE.