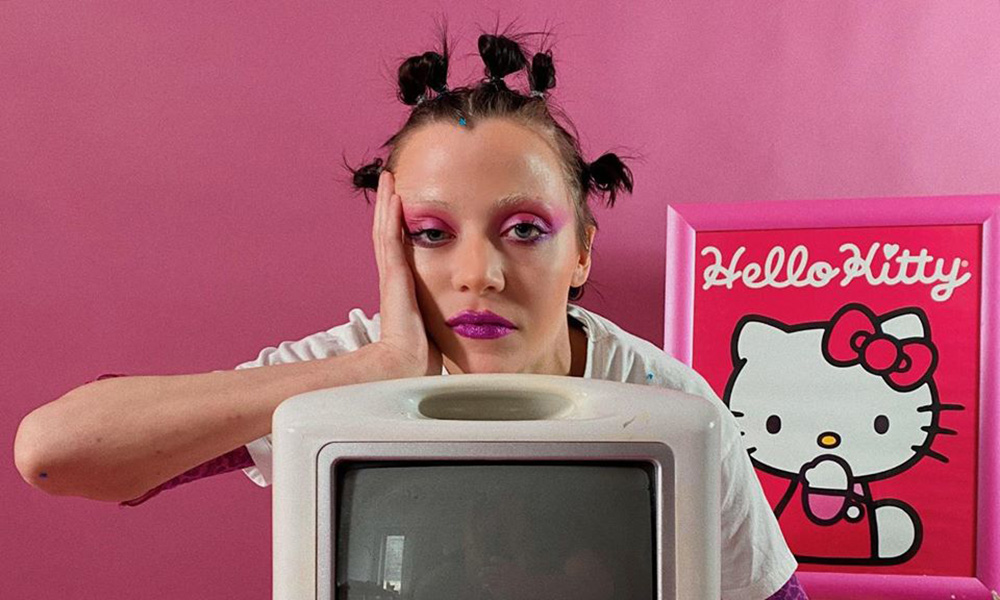 This Coventry based singer-songwriter is on the way to building a career that, in her own words, even the most traditional of family members can appreciate.

YNES is as DIY as they come, from designing and printing her own flyers to self-producing and editing her own music videos, she’s pretty much doing the work of a whole record label and truly smashing it.

YNES combines the eclectic, harsh feeling of the New York post-punk scene with brilliantly female, early noughties brit-pop lyricism – a winning combo. With three singles under her belt and an EP on the way, YNES is striving to create an inclusive space where people from all walks of life can band together to be creative. BABMAG wanted to know more about her and everything she stands for.

What does Birmingham symbolise for you in terms of the music and culture here?

I grew up in Coventry just down the road, so of course Birmingham was always the place where things were happening, events were held and people seemed more cultured in terms of art etc. That was always kind of lacking in Cov, and so as a teenager, Birmingham was the first major city I really felt as though I was exploring and getting to know the backstreets of. It’s close enough to home for me that the music scene feels like a real representation of what people from here can make when they’re determined. I think the Midlands generally contains a lot of working-class areas, so it’s really interesting to see bands that have risen up from this with everything they have. There’s so much spirit, you can’t recreate it.

What inspires your lyricism?

Real-life situations. I grew up hearing vague romantic lyrics and just got so sick of it. There’s nothing malicious within this music obviously, and it’s generally fine. But I never really connected with that over romanticising, it always seemed a bit disingenuous. I wanted songs that were about real things: like going out with friends and getting too drunk and accidentally bumping into someone from school that hated you, who’s now trying to be your best mate because they heard you moved away. Dumb, overly-specific situations. But real situations nonetheless.

You can hear the influence Lily Allen has clearly had on your music, why her in particular?

I think Lily Allen and Kate Nash in particular were really the pioneers of the unapologetic female britpop vibe. It was something I didn’t realise I needed at the time, and for some reason is still super rare to find. It was so refreshing listening to artists who didn’t ‘American-ise’ their style like most other artists/genres are often pushed to do.

How did you stumble on the idea of mixing post – punk with the singer-songwriter sound?

Lyrics tend to be a big focus amongst singer-songwriter/acoustic artists, which is probably the sole thing I share with that genre. However, attitude-wise, I definitely relate more to post-punk and I guess this is how it ended up developing into this weird cross-genre haha. I used to write acoustic songs, but I felt the response I got really wasn’t reflective of how I felt if that makes sense? People saw me as timid and shy, and I just got so sick of being polite. I wanted to be louder, bolder, and heavier. As much as I wish I could say it was premeditated, it’s always just been an honest reflection of how I feel.

How did your time in Canada affect your music? Did you miss the UK?

I think it mostly helped with my personal growth, which subsequently affected my creative outlets and the approach I had to music in general. It definitely allowed me to recreate my lifestyle and take music more seriously. I called myself a musician there, and there were no school friends asking what salary I’m on, or old acquaintances scoffing at the fact I label myself anything at all. I missed the UK though, and I stand by that fully. I think moving away gave me the break I needed, and moving home again gave me the foundations needed to start taking music seriously.

Your style is so bold and uniquely yours, how did you curate such an interesting aesthetic?

It’s definitely taken influence from different cultures and time periods. People always say ‘I wish I could pull that off’ or ‘I wish I had the confidence to wear that’ and it’s like do it! I can’t pull it off, and I don’t have the confidence either, but eventually people just get used to it. I used to want to blend in completely, and take up as little space as possible – but life’s truly too short and there are so many bigger issues we face in the world than what I’m wearing, so fuck it.

I started browsing charity shops around 6/7 years ago too – looking in these sorts of places and refining a taste based on one-off pieces definitely brings out some wacky outfits. I never really felt like I fit in as a teenager, but my choice to stand out isn’t just a coping mechanism anymore, it’s a choice and it’s solidarity to everyone else who feels like an outcast.

How did the name YNES come to be?

My middle name is Inez, it was my nickname for a while growing up, but when I finally decided to re-brand musically I just felt as though YNES fit better somehow. No one ever spells it right anyway so, no loss really!

You’re a through and through DIY musician, what are your highest and lowest points encountered through this journey?

The number one positive is having complete control over my work and my journey. I read horror stories about big artists tied into these contracts, working under conditions that are borderline abuse, and I have to remind myself that freedom is priceless. I think it’s amazing that artists are speaking out about these issues now and setting the standard higher for treatment in the industry. I’m also massively grateful to be involved in every step of the process. I don’t have a manager puppeteering me, I’m the whole damn show on my own haha. This definitely helps with imposter syndrome as I know 100%, regardless of what my brain says, that all my successes are down to my graft. No one can ever turn around to me and say ‘you’re only here because of me’. And that’s wild as fuck.

On the contrary obviously I take things to heart a lot more because again, all my work is 100% me. I can’t scapegoat anybody else when things don’t go well, I have to take responsibility. But again, I think this helps me reflect and grow as an artist. Financially, it can be weird to navigate, with no backing. But again, the more you invest, the more you care. I cannot let myself fail, because it’s me on the line.

Yes! It’ll be at The Tin in Coventry, as I had my first headline here, so it’s close to my heart. I’m in the process of getting the word out and getting support acts together, as well as possibly some DJ sets and brand sponsors (illustrators, designers, etc.) I just want it to be a really inclusive, creative space for everyone.

What can we expect from you in the future?

I have a few single releases lined up after this EP, and then I’ll have to get back into the studio for a little while I think! I’m currently working on some summer/festival slots so stay tuned for that!