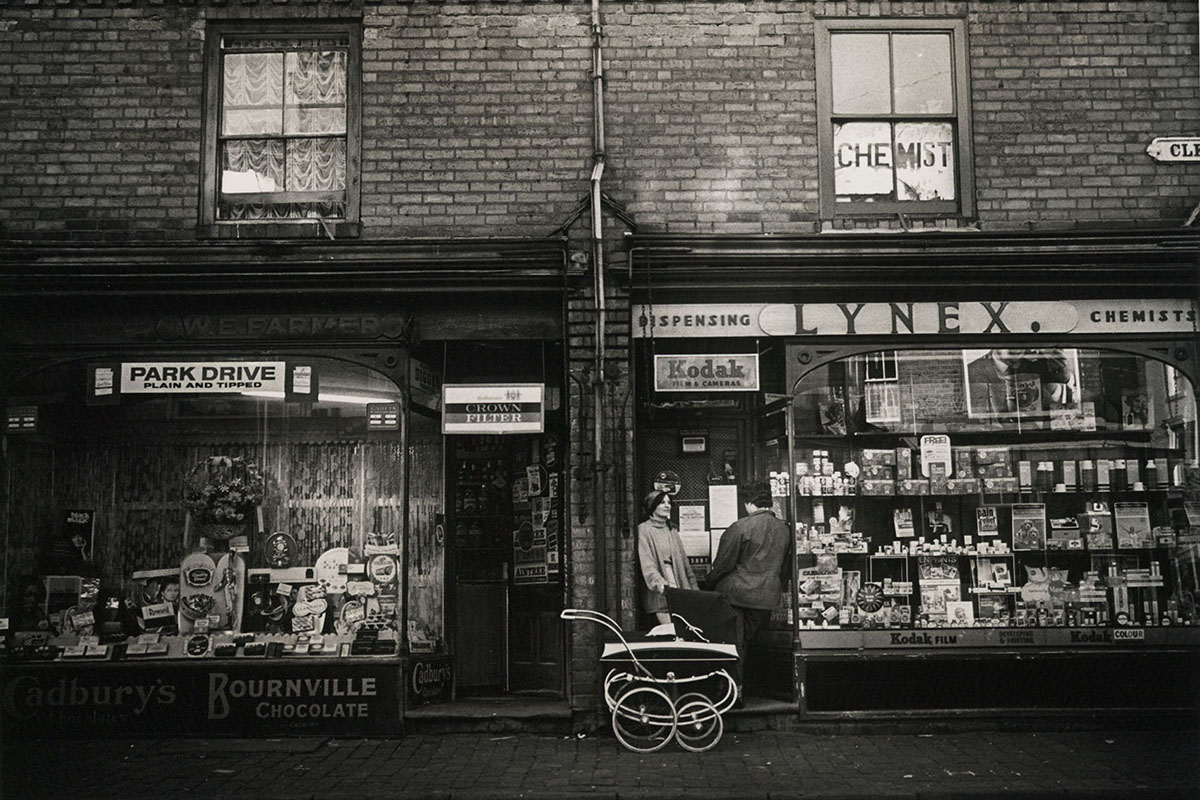 Janet Mendelsohn’s collection of photos have not been seen together since they were shown at the Carpenter Center for the Visual Arts, Harvard in 1970. Created between 1967-69, they show the Balsall Heath landscape and focus primarily on ‘Kathleen’, a sex worker living in the area at the time.

In the 1960s, Varna Road became known as “the wickedest road in Britain”, a culmination of over 200 sex workers, pimps and criminals made the area so notorious it attracted ‘tourists’, drawn in by its seemingly salacious residents.

It was a turbulent and transformative time, moral code was being re-written and the arrival of Asian and Caribbean immigrants changed the city’s landscape. Mendelsohn captures this post war upheaval, with many of the buildings shown knocked down in the slum clearances. Mendelsohn paints a sympathetic picture of class, gender, race and city life. Despite the title of the show, Mendelsohn doesn’t only show us images of the street, there are many social settings seen such as the local pub, hairdresser, launderette and shops. It’s a life on the outskirts of poverty, alienated from the white middle upper classes and a region left to develop its own identity through obscurity.

To others, it may have seemed like a no-go area, but Mendelsohn depicts a retreat for those who were displaced from other places in the city, a place where they could make their mark. This tenderness is accentuated in the soft lighting and deep contrast of the monochromatic series. However, through segregation, we see the area’s poverty and prostitution; it’s not all rose tinted and affectionate, yet Mendelsohn touches on beauty, shown through the close relationships she developed with her subjects.

One photo, in particular, encapsulates this mix perfectly; in the street we see a gentleman in a turban standing under a billboard advertisement next to a Jamaican dancehall flyer. It’s a wonderful blend of cultures, showing the street developing a new identity. Another depicts a group of men sipping Pepsi and smoking under an Indian mural in what was known as the Kasmir coffee bar, showing the immigrant population asserting itself in what could be considered a ‘hipster’ bar today. There’s something about these photos that looks like a film set. Certain images could also be from the Victorian era or modern day, such was the landscape of the area at the time.

Kathleen’s vulnerability shows through in Mendelsohn’s untitled shot of her on the street in silhouette, the sunlight behind her almost diminishing her form, like she’s slowly fading away. In another photo we see Kathleen surrounded by family, she looks out of the window as though the scene is not happening around her, her mother looks the other way under a crucifix, the children are fixed on the camera in front of them. It’s chaotic yet the women seem contemplative despite their situation.

One shot of Kathleen shows her in a different light, she faces the camera directly subverting our own voyeurism; she’s powerful and standing outside a local bar, drink in hand. This image is appealing, showing Kathleen in a position of command as opposed to some of the other more submissive poses.

Kathleen’s sexuality is pre-conceived; we are aware she is a prostitute, but what’s most interesting is how else she is represented, showing us typically feminine traits such as motherhood, vulnerability, sensitivity and intimacy. They come through in Mendelsohn’s photos as positive affirmations to her lifestyle.

The photos link directly to social issues of the time. The documentary style play Cathy Come Home produced in 1966 by the BBC highlighted the housing crisis after the war and called MPs into action. A week after it was broadcast, the charity Shelter was also established. In 1969 Save the Children funded a documentary film on slum clearance called Our Generation showing the lives of children living in slums and also those who had been moved to new hi-rise flats and the issues they faced. This influence can also be seen in later works by photographer Mary Ellen Mark and her series of photos about Tiny, who supported her crack habit with prostitution in Seattle as well as the film Streetwise by Martin Bell, showing rampant homelessness and prostitution. Mendelsohn finds the balance between this familiarity and sensationalism, she doesn’t act the voyeur but rather the documenter; her subjects are involved yet we are removed from viewing them as destitute.

The reception to this collection of photos may be seen in a favourable light today, rather than at their formation. Our society now pushes for the openness of female sexuality and expression rather than repressing it, however, prejudices towards immigration, prostitution and poverty are still evident. It’s also naive to think that illicit activities are always liberating for those involved, although, “live and let live” has been a motto attributed to this series and that is what we should take away from it. Mendelsohn creates a commentary on humanity; we are all made of up so many influences so who are we to judge?

Mendelsohn captures a moment in time, it really is a must see record of our social history and the formative years of Balsall Heath and the city of Birmingham as we know it.