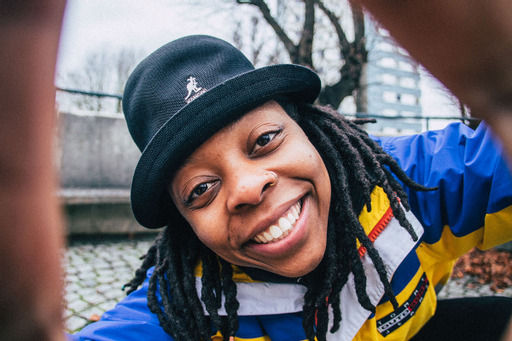 Signing to High Focus Records at the beginning of 2020, TrueMendous continued to push her music in what was a troublesome year for most.

Dropping her debut EP HUH?, which featured on the FIFA 21 Soundtrack as well as blessing our TV screens in the McVities and Christmas Pepsi Max adverts.

BABMAG delves into The Misdiagnosis of Chyvonne Johnson, TrueMendous’ debut LP which was released last Thursday, to see what she has to offer the world.

Cause A Scene is a powerful intro to the project, acting as a literal warning shot. The message? Simply, do not f*ck with TrueMendous and put some respect on her name as it is one which we’ll be hearing for years to come. She commands this with the lyric,

“”Run me my flowers while I’m still here”

Towards the end of the song we hear the voice of TrueMendous, acting as a panicked news reporter who highlights the incoming of the rapper as something  “F*CKING CRAZY”. Predicting a third wave of something special, which she was not wrong…

Y (feat. Kofi Stone) is a lo-fi, UK hip-hop masterclass with fellow Brummie Kofi Stone acting as sparring partner. It’s a boom bap instrumental backed by a calming saxophone playing throughout. The song sketches Truemendous having a self-pondering session of honest truths with the “Y’s” relating to money, relationships, self belief, attachment issues and more.

Breaking through the fourth wall, she asks her listeners “Can you relate everything that I say but still act like you don’t know what I’m talking about?”  The convicting hook acts as a reminder to the masses that she is: “One of the best to ever do this shit and ain’t saying it for you to agree.”

Kofi Stone then steps in and clears his conscience, confessing a breakdown of a situation-ship in the day-and-age of dating app mismatches:

“Swipe right, Issa match thought I had in the bag, but you were annoying like lying on a bed of gnats.”

Despite knowing this person wasn’t for him, he emphases a sense of familiar regret and resentment. TrueMendous closes off the reflective single venting insecurities about online trolls and struggling to detach herself from the person she cares for. “If I’m no longer seen as an outsider why can’t I can’t come in?”  The pair have secured a big win with this one, showcasing the things we usually keep inside, out in the open. Simply beautiful.

Worst Child is another introspective effort featuring the singer Rozzz. Complementing on the track, she questions, “Do you love yourself, you’re a flower child, you’re an earth child.” TrueMendous keeps it real and we relate to her with the line, “What the f*ck I need a circle, I don’t work well with people who don’t work at all”. The presumption may be that she’s anti social, but as they say, the company you keep is a reflection of who you are.

In TrueMendous’ instance, being unproductive is not her, so why would she lower herself to being constantly in and around people who are like that? Rozzz seals off the tune beautifully with her elegant jazz scatting, making it one we could go back and listen to all day long.

You Don’t Wanna is a track that sees TrueMendous absolutely murders the fast-paced trap beat, flawlessly flowing with double time rhymes and clever lines like:

“Only rule that I pickle out, Anyhow I’m in Emma’s house watching Emmerdale while the tenants out”

Displaying the confidence it takes to run a double time flow, at the speed of light, for at least 32 bars is insane! The lyricist manages to keep her listeners entertained and draws out of her own lane to exist within the scene, running rings around her competition with ease.

Such strong, standalone singles shape The Misdiagnosis of Chyvonne Johnson as an in-depth introduction to TrueMendous. They usher in a wider audience as well as doffing her hat to her name being thrown about as one of the best rappers in the UK.

Be sure to check out our previous article with TrueMendous, it’s really insane to see the progress she’s made within a year.