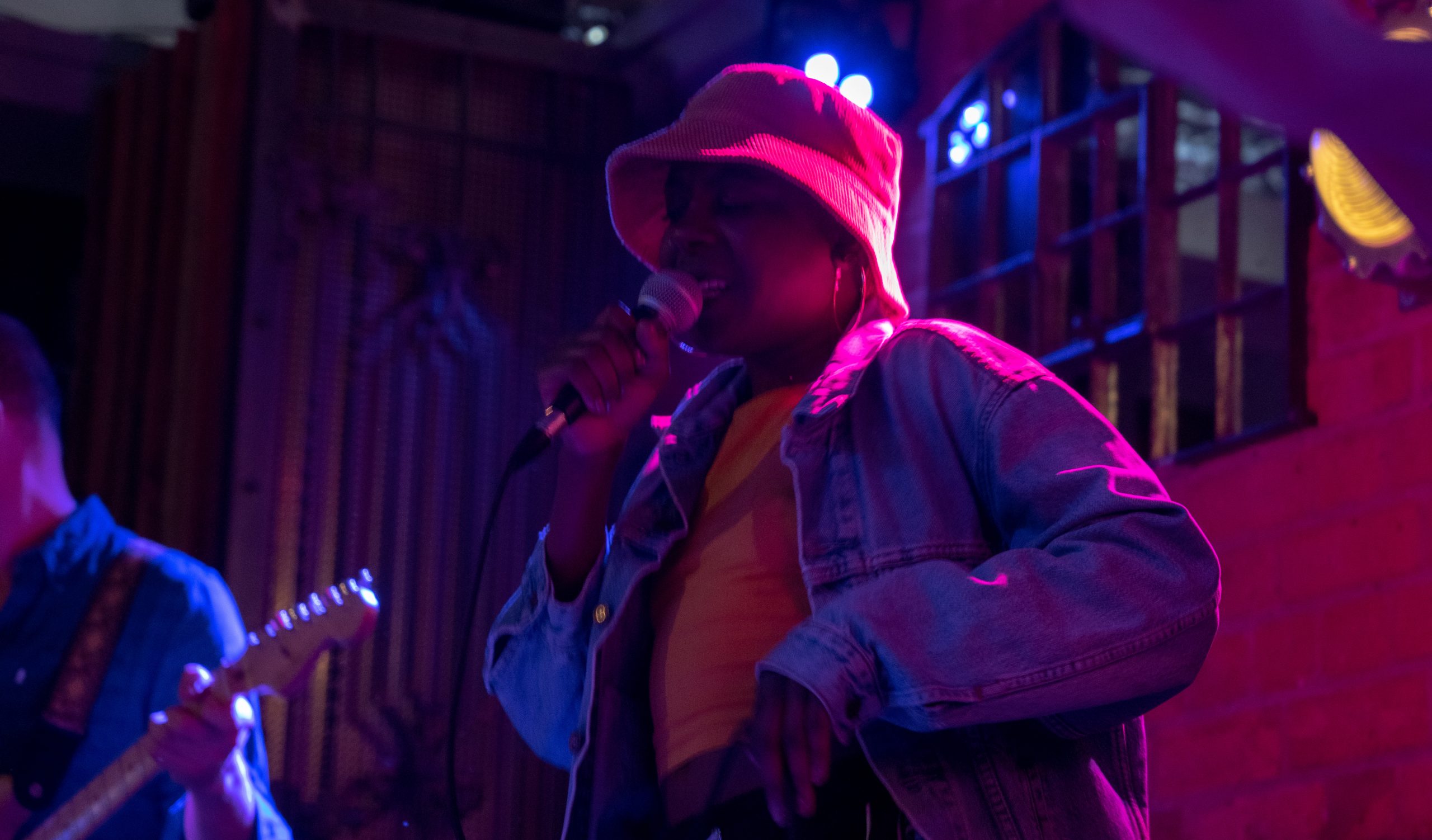 Ruth and The Ark Do Regular Sunday Blues

The Ark behind her, Ruth was in full force when she kicked off with Ruby, a bluesy, skanked up recipe for the ladies who wish to vibrate at a higher level.

Every third Sunday of the month, Ruth Kokumo holds her own showcase at The Actress and Bishop in the Jewellery Quarter.

Last Sunday’s performance was a particularly soulful occasion, with Faye Smith accompanied by Nicolas Clarke starting off the night, Ruth as a solo artist to follow, then The Ark joined her and finally a jam session, open to all, closed the night.

The upstairs concert space is intimate with a small, low stage bathed in pink and purple lights. Faye Smith stood centre stage dressed in her usual hippy garms (ones she probably made herself) her support, Nicolas Clarke is off to the left. The pair began with a slow groove, Faye is subtle and full of effeminate emotion at the start of her set.

But don’t be fooled, her voice ranges from soft and playful to strong and commanding in a mere beat. She interacts with the audience without hesitation and we are charmed by Faye’s comfortably chaotic energy. At times her vocals are clear and cool, almost like a lullaby, then they sore, dip and grunt as Faye moves with the rhythm of Nicolas’s guitar – the chemistry on stage is clear.

The duo’s use of tempo, moving between and reflecting upon the different feelings explored in Faye’s lyrics is poignant. We find ourselves at sea, riding similar, but uniquely different emotional waves together.

Ruth Kokumo, treats us to a solo acoustic guitar performance of Conquer, which she says is about “some poor boy”, before she rallies The Ark for a stripped back set. Her lone sultry vocals and gentle rhythms give us but a taste of what is to come.

That soft voice disappears and Ruth’s voice explodes with love, pain, rage and gratitude. Ruth’s honesty on stage is almost unmatched and it’s certain she’d be stamping her feet and calling up at the sky in exactly the same way, whether the audience were there or not.

The Ark, consisting of Robert Reed on guitar, Matt Fellows on drums and Elliot Smith on bass, are tight and clearly all technically skilled instrumentalists. They follow Ruth’s vocals with a myriad of jazz, funk, soul and obviously blues. All their solos are truly something to behold, but Rob’s riffs take the biscuit – he works his guitar up into the rafters!

You can feel sparks fly, as each member of the band’s eyes dart between the others, elated by the ever-growing epic nature of their collective sound. Ruth is so blown away by their improvisation that she sits down, sips her Guinness and joins the audience in being humbled by the talent.

Take the time to see Ruth and The Ark, and Faye Smith when you get the chance.

Faye’s hard to pin dow, although you can usually catch her at a Shanty Town at The Kingsway.

You can catch Ruth and The Ark in full swing at The Fully Automated Luxury Space Communist Party, at The Hare and Hounds, on April 9th and catch their updates on socials via @ruthandtheark.