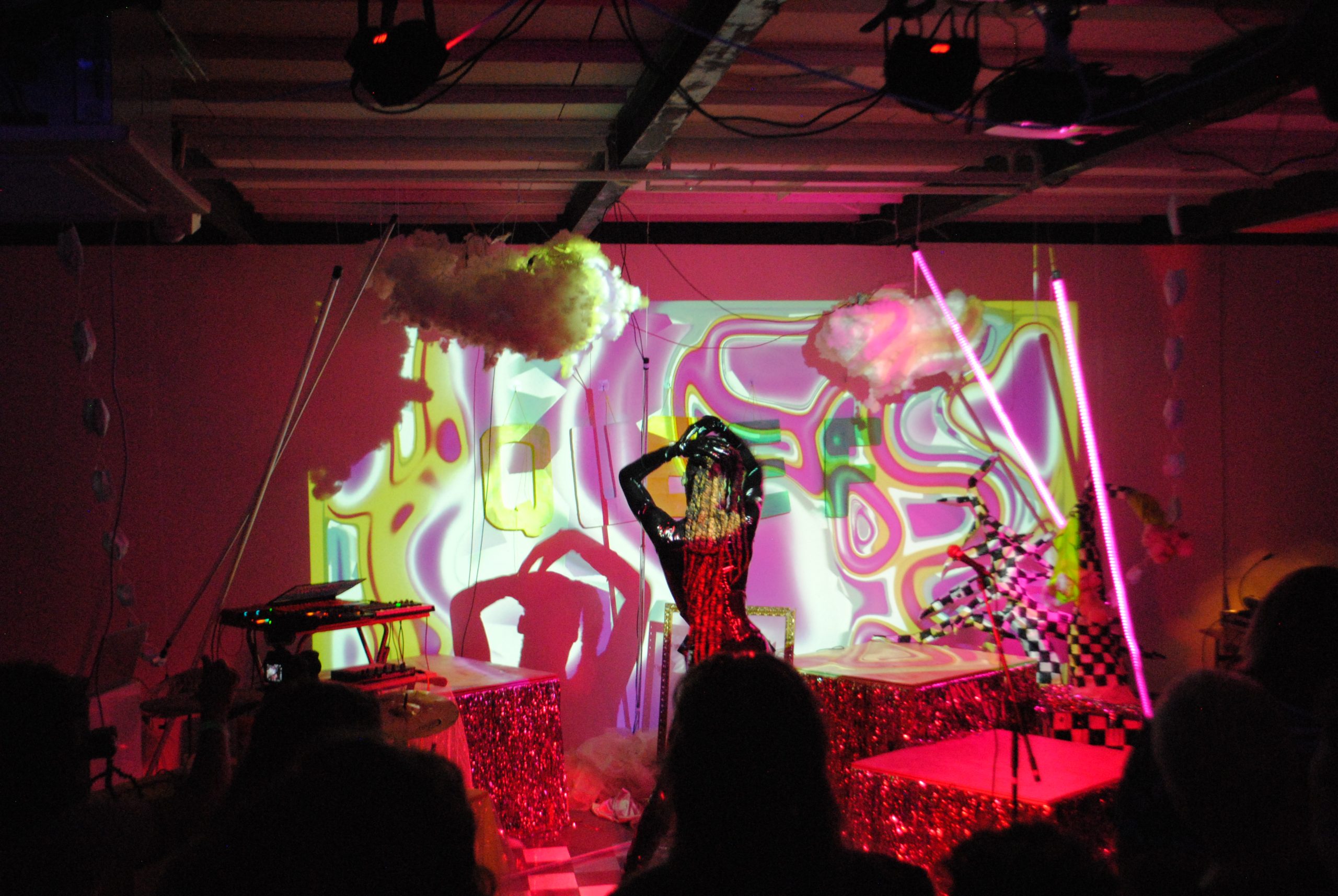 Whereas other events may blur the lines or overstep the mark, QUE.E.F eradicates boundaries without a second glance.

The night’s captivating activities commenced outside Centrala, with a parade of hooded organisers and artists, followed by a live birth and generally culty, queer behaviour.

Starstruck, and wonderfully confused, we were then beckoned inside into a QUE.E.F wonderland.

The downstairs space was extravagant, complete with delightfully queer pornography and a playroom courtesy of Temporary Cruising Zone. Next, there was a cord cutting ceremony, which was deadly serious and infinitely hilarious. After that, we made our way upstairs, and the rest, as they say, is history.

The main performance area made me instantly wet. Its outstanding scenery included flurries of cotton wool clouds sporadically lit up by decadent lighting, more colourful rooms with props to explore and so many texture that I just wanted to touch.

With no stage, and no real barrier between artists and audience, QUE.E.F was inclusive on a whole new level. The atmosphere was intoxicating, extra-terrestrial and sensual, but most importantly it was a safe space for me to be my little brown, bi, non-binary self.

First, we were blessed by Black Peppa’s gorgeous presence and electrifying drag show. A true inspiration, they never failed to tease the audience, playfully interacting with us at every opportunity. Their sophisticated yet sassy performance included live Beyonce lip syncs, which meant Black Peppa had half of us on our knees and the other practically touching the ceiling before 9pm.

What is it about drag queens that makes every letter in the alphabet soup lose their shit? The evening’s second act, ARCH FEMMESIS, had no trouble matching Black Pepper’s high energy, although they did it with their own unique flair. The art punk electrolysis duo were captivating.

Their futuristic, exquisitely dirty, electronic beats were creative and unpredictable, pulsing through the crowd. Dynamic vocals flitted between a squealing, orgasmic soprano and a commanding bass, and ARCH FEMMESIS taunted us flirtatiously: “Like this, how’s that for you?”. Our only reply was unintelligible screaming, so they definitely hit the spot.

QUE.E.F’s next act, BIPED was like nothing I’d ever seen or heard. Their avant-garde, industrial, IDM sound made me want to curl up and cry one moment, and the next I was ready to riot. BIPED’s style is unexpected and erratic, jumping between total chaos and complete clarity.

Their broken beats and spoken-word style anti-establishment rhetoric was hypnotic. BIPED’s strangeness and unwavering commitment to the truth was more than welcome by the misfit, queer audience who know all too well that the fight for equality is far from over.

BIPED enthusiastically commented: “(QUE.E.F) was the best event I’ve ever played as any act or band. Thought out and detailed, authentic and absurd, not trying to sell 1000s of tickets or sell queerness at all, but built off love”

The final act of the evening was Iceboy Violet and they gave us an incredibly emotive and vulnerable performance, completely immersing themselves physically in the audience. This gave us permission to be close to each other; an act that has come to feel dangerous in recent years.

At points, Iceboy Violet’s vocals were angelic- expressing gratitude for life itself. Other times, their heavy use of reverb growled the intense despair that can frequent our existence. All the while, impressive walls of sound ricocheted, mesmerising the audience and solidifying the importance of our transcendent, collective and beautifully queer experience.

In a city where pride is sponsored by HSBC, QUE.E.F might just be the beginnings of a long-awaited, authentic, queer scene in Brum.

Be sure to get your tickets early, and to leave performative allies at home, because the next one will sell out!