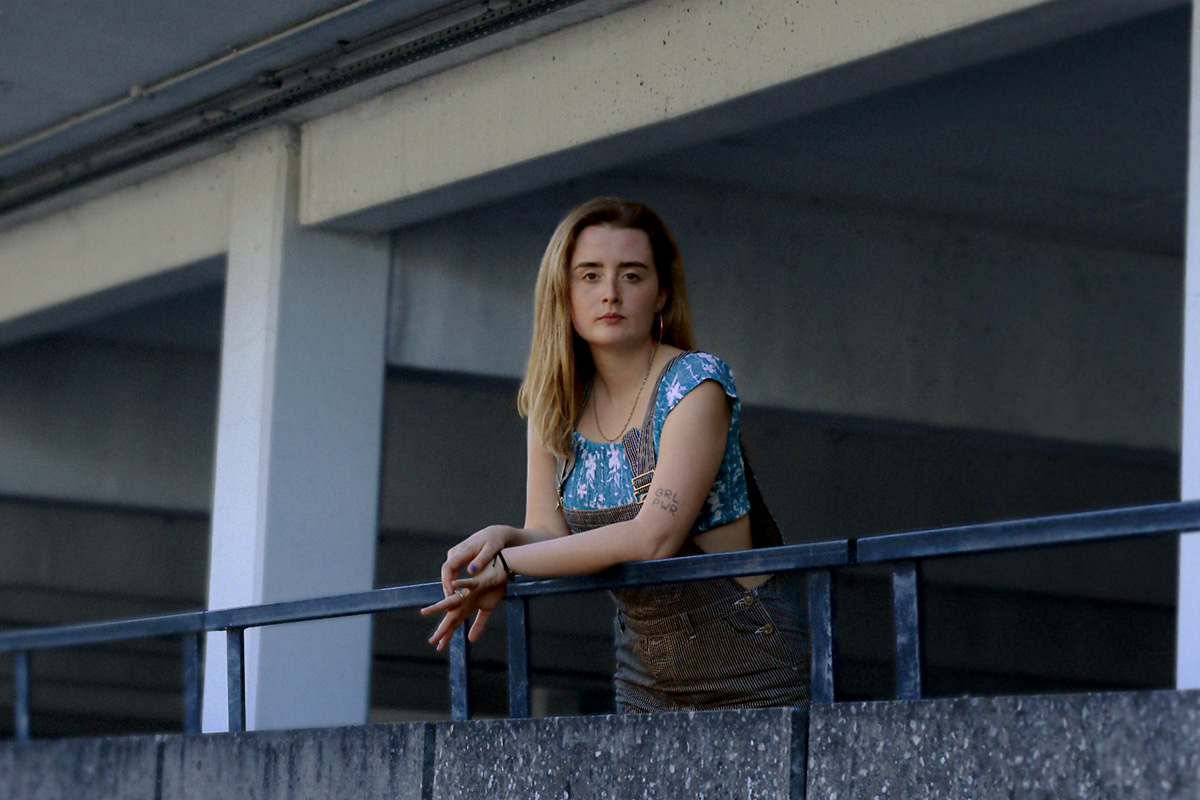 Tattoos can say a lot about a person. Whether sincere or a bit of fun, they have the ability to tell stories, assert identity and signal a person’s innermost passions.

It is fitting then, that on Clarabelle’s arm are the words GRL PWR proudly topped with a crown. The stick and poke symbol is a suitable first impression to this subversive character – a character who celebrates the strength, independence and power that comes directly from being a woman, not in spite of it.

Born in Birmingham and raised on the bass of Digbeth’s graffitied railway arches, Clara McDermott – better known by her Clarabelle moniker – has always had an affinity for the creative industries and a desire to be involved in sound system culture.

As a teenager she defied the lazy stereotypes often crudely labelled onto her generation and single-handedly founded the events brand Tunnel Vision. Celebrating the best in bass, garage, drum and bass, house and jungle, Tunnel Vision has forged a unique space on the Birmingham, and now Bristol, underground scene. The events regularly play host to the best in UK sound, with Serial Killaz, Coki, Kahn and Trilla amongst the names to take on spinning duties over the last four years.

But entering the lion’s den of club promoters baby faced and seventeen was no easy feat. Implicit bias has grasped the Birmingham music scene after years of male-domination at all levels, from DJs to lighting guys and venue managers the image of what a successful person is in underground culture is rigid in people’s psyche.

Clarabelle tells of how her peers underestimated her potential and tried to take advantage of her presumed naivety. She was the outsider attempting to break the mould,

“I’ve had people say some really hurtful things about me being a woman – it really bothered me because I didn’t understand why my gender had anything to do with it.”

Now twenty-one years old, Clarabelle is based in Bristol and studying at the British and Irish Modern Music Institute. Arguably the home of old school drum and bass, and a city of legendary status on the UK club scene, Bristol seemed like a natural progression for this creative. Whilst the city and its event spaces are continually under threat of redevelopment and gentrification – much like Clarabelle’s old stomping ground in Digbeth – underground music is fighting for recognition.

In this challenging environment, Clarabelle is giving young women across both cities a platform they seldom have. In an act of defiance and an FU to the bias of the music industry, Clarabelle has founded Bad Girls Club. Created under the Tunnel Vision umbrella brand, Bad Girls Club events are dedicated to bringing upcoming female DJs to the fore. It centres women in soundsystem culture and resists the lack of representation and tokenization of female DJs on line-ups across the country.

“The thought behind the Bad Girls concept comes from the idea of non-conformity. Daring to venture into such a male-dominated industry goes against the usual patriarchal standards of society and I want this night to be a place where female DJs and producers can flourish.”

Bad Girls Club has played host to drum and bass legend DJ Storm, a booking that Clarabelle describes as “a dream”, fast rising selectors Jossy Mitsu and Sherry S, as well as a range of exciting newcomers.

These projections of women help break down cultural barriers and highlight the existing network of female DJs performing around the country and in local clubs. It allows aspiring selectors to see a world beyond the boy’s club of DJing, to one of representation and opportunity.

With defiance and a clear sense of pride for her performers, Clarabelle explains why she believes women-centred parties are important: “Women in the industry have come so far in recent years and it’s so vital to reflect on and appreciate these movements through how we know best – a big old party!”

Whether you want to label her an event promoter, entrepreneur, DJ or all-round bad ass gal, Clarabelle’s motivations are inspiring and her mantra is simple:

“If I meet someone who’s going to judge me and my abilities based on my gender then I have no time for them and they have no place in my musical journey. It was hard to get my head round at first but now I’m like screw ‘em!”