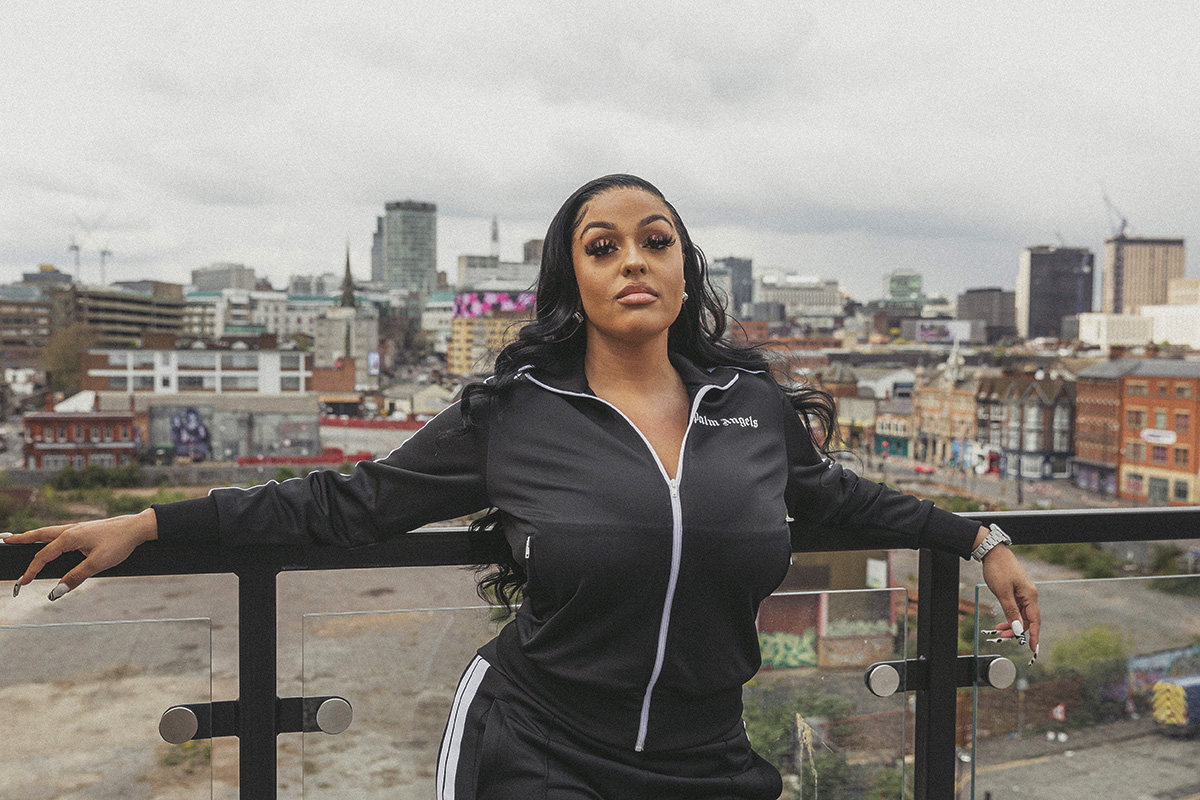 The real life Wonder Woman of Winson Green, Miss La Familia, has emerged as one of the biggest acts in Birmingham in just under two years.

Rightly attracting a buzz within the UK rap scene, she first burst onto screens with Addictive Freestyle which threw her into the limelight. Since then she’s gone on to collaborate with some of the big boys in the industry such as Abra Cadabra, Ivorian Doll & Poundz and more.

BABMAG caught up with Miss LaFamilia whilst she was filming her latest single, Mob Life. Sitting neat outside the Mailbox in a drop top Lamborghini, wearing a Palm Angels tracksuit, flawless make-up and an impressive Buss Down Watch that glistened brighter than any light shining on her and her entourage’s tour bus.

In person, Miss La Familia is witty and carries herself with a head-honcho like presence, but what stands out most is her self-confidence. This is a woman in complete control of her music, image and business matters.

Miss La Familia isn’t waiting for the whole country’s recognition, she has it from her nearest, dearest and isn’t worried about the rest.

How are you? How has it been since everything’s half open again?

I’m good thank you! It feels amazing being able to be back out, filming a video. This couldn’t be possible a few months ago. So it’s nice to have a bit of normality.

Would you say there were things in which you saw in your area growing up that inspired you to become more entrepreneurial?

I mean I grew up in inner city Birmingham, Winson Green, so obviously I spent a lot of my teenage years focusing on money. I’ve always had an outstanding work ethic whatever I do, whether it was owning the agency or doing whatever, I put 100% into it.

Transitioning into music was very organic for me, but I want to upkeep the work ethic I’ve had so far and keep doing the city proud and make sure I always include people from Birmingham. We’re shooting today with one of my directors I originally started filming with, he’s from here. Sometimes we use a lot of people from London and they’re good at what they do; but it’s always nice to come back and give the city some shine as well.

I feel like this is why we are always classed as being “behind London”- people don’t really do that and I feel like if we were to work with each other more from time to time we would have such a bigger network, bigger artists and it’s time to make the change.

Do you feel like the groundwork that has been laid by artists like yourself, M1llionz, Jaykae, Stardom, Lady Leshurr, Lotto Boyz have made it considerably easier for the next-gen to follow suit and establish themselves as successful artists?

Now we’ve paved the way, hopefully the younger generation will come up and kill it, give the same energy and hopefully it will become the go-to music hub which is as equal or bigger than London.

I feel like there needs to be a lot more money to be put into the city for musicians, if it wasn’t for me being an entrepreneur and doing what I had to do to fund my own music career, I wouldn’t have been able to try and follow my dream. I just feel like there needs to be money available for people who are genuinely talented, I would’ve done this a long time ago if I had the money and the support. More support musically is needed in Birmingham, 100%. It would keep a lot of people out of trouble.

You have a very powerful and bold sense of style, in what ways has Birmingham influenced your style and presence?

Be you, be comfortable… If it’s in a tracksuit, kill it, If it’s in a dress and heels, kill it! Just do whatever works for you as I do me.

Do you feel the pressure of beauty standards and expectations placed on women in the music industry?

Well for me, day-to-day, I’m in gym wear, tracksuits, cosy! I’ll go to the gym, look after my family and do what I need to do. Unless I’m working then I’m glam, day-to-day I’m natural vibes and do put myself on the internet with natural self also so people aren’t too shocked when they see without a wig and makeup on you know what I mean? We need to keep it real so people know that this is just an image.

[Interview halted as Prada, the pooch needs the toilet]

CONT: ‘Cause if I was always done up, it’s a lot of pressure for myself and it would mean I would have to uphold and keep giving them [fans] the same energy, you gotta keep it realistic and stay in ya lane.

In what ways has Birmingham influenced your style and presence?

Birmingham’s always influenced my style as this is all I know, so the reality is my style dress wise is dependent on my mood and how I feel, but in terms of how I am and the music I make, it’s played a big influence.

Being a mother yourself and also ‘The Mother of the Mob’ is leadership something that you’ve naturally grown into over the years or have you always known?

So obviously being the Mother of the Mob, being the manager of a modelling agency, required me to be a mother figure for a lot of the models, in business and on a personal level. I decided that I was going to dedicate my life to getting these girls to the next level and once I felt like I served my purpose, I felt like I needed to fulfil my own. I never took time out for myself so now I feel like it’s my time to shine, while I still bring my girls through.

But respectfully, I feel like I have served my own community service. Now I’m living for me, my mom and my son. I will make history, there is no other way now.

Being both a rapper and singer, do you feel like you’re in your own lane compared to most artists in the scene?

Most definitely, I feel like I’m in every lane, so literally when I drop this year I’ll be glad for people to see my versatility and the different levels I can go to. It’s exciting as there’s no one else out there like me right now, I’m talking even in America. When I’m in the studio doing my music, every song is different. Which is very rare… A lot of these artists have the same vibe, they chase the dragon. Well no! I’m trying to show you exactly what I can do, how I can do it and I’m telling you know when I drop this tape a lot of heads will turn.

Does a day like this make the transition from your Addictive Freestyle until now all worth it?

For sure, a day like this for me, you know it is work, but at the same time but it’s enjoyable. I live in London now, so the reality is anytime I get to come up here it always feels like a happy place, even though I have a lot of bad memories, there’s a lot of good ones and it will always feel like home for me. So me being out here right now feels natural, I’m happy to be here!

Congrats on Dumb Flex, your debut single and the star studded remix was received very well. What was it like connecting with Abra Cadabra initially? If he was from Brum which area would you feel he’d be from?

Erm if Abra was from Brum he’d most definitely be from the Inner City [Laughs]. He was actually really sick to work with, as soon as I sent him the track, he heard it and said straight away “Yeah this is a vibe”. He dealt with it just as I expected he would, he was a dope feature, he had the vibe and energy, he brought all of the OFB gang in the video showing support which is very dope as well, that’s in his element where he’s thriving and I brought my sauce, we put it together and it was crazy.

We see you have been booked at Reading & Leeds Festival this year, will this be your first time performing at a festival?

Yes! I’ve done shows and support tours and stuff like that, but as for festivals, me running out on stage, it will be the first time. We’re planning to do a headline show for Birmingham, it’ll be the first place we’re coming to.

Do you have any words of advice for up and coming artists from the West Midlands?

Stay true to yourself and stay true to your craft. Don’t expect to go or be anywhere if you aren’t expecting to put in the work. It takes tears, sweat, long nights, things that don’t go your way, you lose friends and lose family even. Sometimes it’s uneasy but the road to success is never easy. Coming from a place like this you have to try 10x harder. You can’t just walk down the road and find an opportunity, it’s not like London, but we have to step it up and make sure the ingredients to your sauce is on point, the sky’s the limit really.

What can we expect from the new project expected later this year?

All I can say is, it’s coming this year and it’s called Elements. I’m giving different elements of myself musically and visually. It’s going to be a dope piece of art, I wouldn’t even call it a tape. It’s going to speak for itself, very colourful, very vibrant and up-lifting. These are songs that have come through pain. I’m going to take people on a journey, something very meaningful to me.

What 3 words would you use to describe the rest of your 2021?