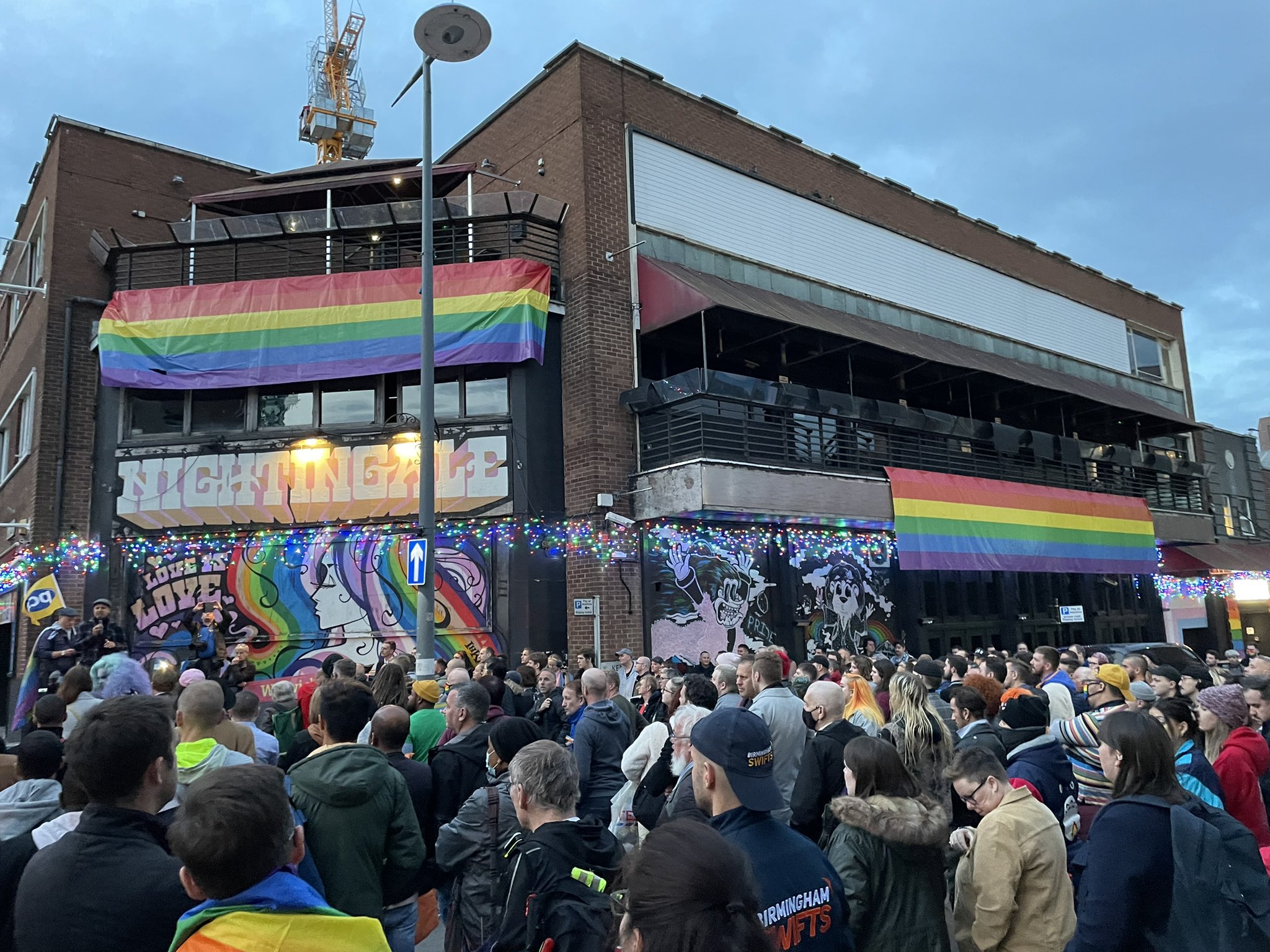 Is Enough Being Done To Protect Queer Lives In Birmingham?

On Thursday, a demonstration saw hundreds gather in the Gay Village to protest the recent spike in LGBTQ+ related hate crimes.

The gathering was in response to recent attacks in the city’s Gay Quarter, including most recently when two gay men were attacked whilst holding hands on Holloway Circus, leaving one of the victims covered in blood after a wine bottle was thrown at his face.

The string of violence has sparked fears about the safety of the LGBTQ+ community in Birmingham, with many rightly demanding action be taken to protect queer lives.

“We’re basically saying this is absolutely not acceptable and we will not tolerate it” explains Salman Mirza, organiser of the event. The notion of solidarity was certainly felt throughout the evening with call and response slogans like “When bigots attack, we fight back” being chanted by the crowd.

Many online users took to social media to praise the turn out of the event and comment on the sense of  togetherness felt.

“Proud to stand in solidarity with my LGBTQ+ siblings after an increase in homophobic hate attacks in our city. Birmingham’s strength is in it’s diversity and it’s unity- and there is no place in it for homophobia, transphobia or discrimination of any kind.” – @alex4knn

However speakers at the event included the West Midlands Police Commissioner and a handful of protesters voiced their issue with a member of the police speaking at a LGBTQ+ event, with the slogans “ACAB” and “No Justice, No Peace, No Racist Police” audible as the commissioner gave his speech.

“For a lot of the queer community, safety and the police are not the same thing. The criminal justice system does not work in the favour of LGBTQ+ people and so why should we trust the people enforcing it?” – says one protester who could be seen chanting the well known phrases –

“It’s an insult to people of colour in the community too. We can’t have safe spaces when the police, who are supporting institutional bias, are in it.”

One online user commented “Angry but standing in solidarity, More must be done to protect our spaces and our community throughout the city!”- @unit_1974

“Well Done #Birmingham. A great show of solidarity #LoveIsLove #LoveWins. Hoping there are some concrete plans as a community to tackle the rising hate crimes. Would love to see something like Manchester’s Village Angels community wardens.” – @PositiveLad

Some attendees also raised concerns throughout the event that protests may feel helpful at the time but long term action needs to be implemented too, with the phrase “less talking, more action” being chanted by a few protesters who feared speeches from those in the establishment may be more performative than proactive.

However, Simon Foster, the new West Midlands Police Commissioner has taken steps to build relations with minority communities and show a commitment to enacting change.

On Thursday, Foster, along with West Midlands mayor Andy Street and Birmingham Council leader, Ian Ward announced a series of changes being implemented to help make the Gay Village a safer space.

“West Midlands Police has already increased patrols in and around the Gay Village and the police and crime commissioner has commissioned a new £200,000 service to support victims of hate crime.
Meanwhile, Birmingham City Council is providing free hate crime training to businesses at Southside venues as well as helping to develop a space open to anyone who may be feeling vulnerable when out and about in the Gay Village and the local area.
The West Midlands Combined Authority has been working with Southside Bid and other partners to look at issues such as CCTV and 24/7 public transport to improve night-time safety in the area.”

It’s great to see that the concerns of the community are finally being met with direct action and we hope that the protection of queer people in the city is taken seriously moving forward.

If you’ve been affected by any of the issues raised in this article, Birmingham LGBT’s helpline can be reached on 0121 643 0821.