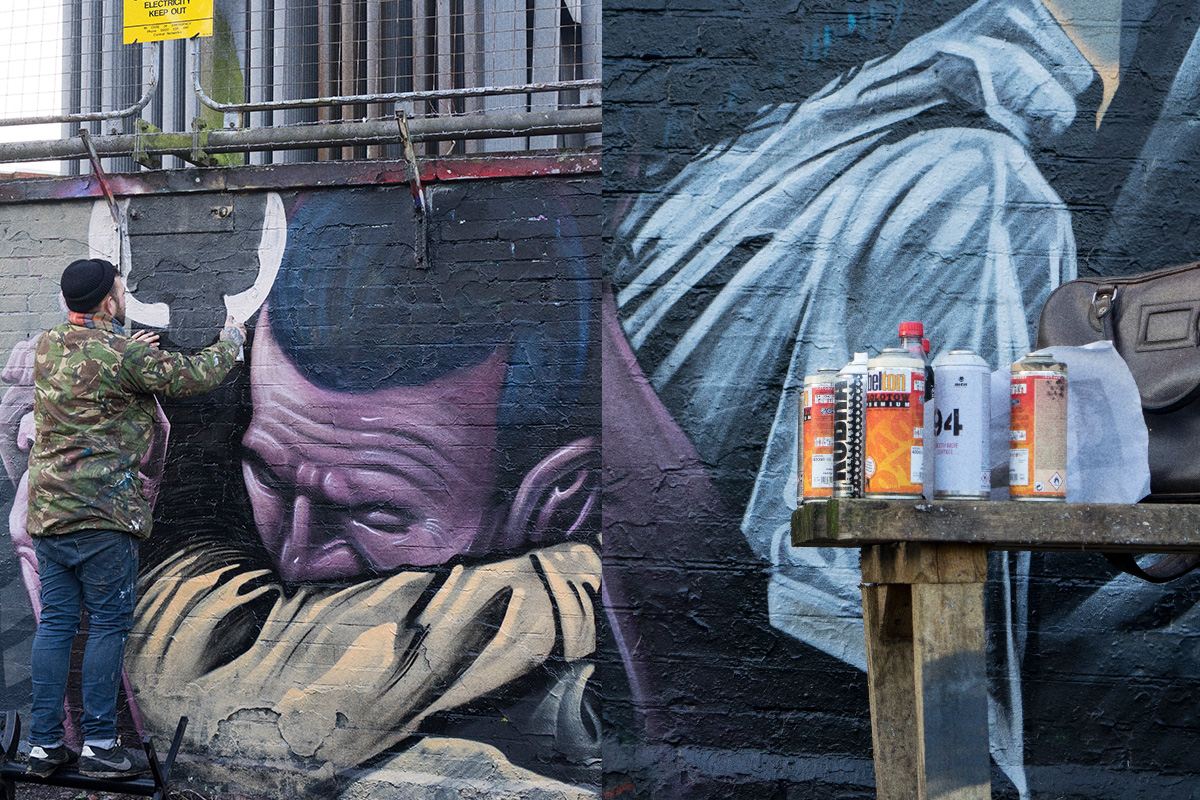 Known for his character based murals, Gent48 is a mixed media artist who has painted around the world and picked up awards in multiple continents.

Having known of Gent now for about 10 years and having known him personally for around 5, I’ve been lucky enough to become pretty good friends with him and as an artist and I’ve learnt a lot through watching and painting with him.

In my opinion, he’s one of the top character artists in the world and as we’re lucky enough to have him born and bred in Birmingham, it seemed like a bit of a no brainier to do our first interview with him.

Right, shall we start with the boring shit, what do you write?

Well, I write Gent 48, but then I used to write AGENT didn’t I, so depending on when people met me, some still call me AGENT.

I don’t know what year, I’m 32 now, and I probably got into it when I was 14, sketching letters, and trying to do graffiti characters. Every interview I do I mention my brother, because he used to do it back in the 80s, so more I grew up with it around me from an early age, they all used to skateboard, tag on shit, his whole bedroom was covered in tags, so I grew up knowing what it was from probably 4 years old.

So would you say you got into it because of your brother?

Yeah, but I was always drawing as a kid, it’s because… ha! its because I was a bit odd when I was a kid. I was a bit naughty, I’d have behavioural problems and dyslexia, shit like that. When I was drawing I wasn’t getting into trouble, so that lead to me being encouraged to draw as much as possible. Graffiti was just a next step of creativity for me.

Yeah, I was also a naughty kid, I think a lot of artists were, I guess it’s kind of an outlet.

I went to a junior Catholic school man, being like the naughty kid of the school, from up till the start till I left. There was just this one teacher, Mr Mathews, he sort of encouraged you to draw, and he’s the only one I remember. We had another teacher called Mr Regan and he kicked my chair away from under me and I smashed my head off the desk haha, if I ever see him again I’d throw a table at him.

So we were saying before that we grew up on drawing cartoons some of your older stuff reminded me of Disney, was that an influence?

I think as a kid we were really poor, so I never had Disney, Disney videos were like £30 or something back in the 80s and shit. I’d always get Beanos or any other comic books, and just you know, try and draw them, and then change them, from like an early age instead of completely copying them. I’d take parts of the character, draw their eyes, draw their nose from someone then try and make up my own kind of piece.

Is that the way you would say to go about it, especially young kids?

Yeah, I think so. It’s always good to have a starting point, some sort of reference to inspire you if you’re new to it. When you’re copying comic book characters you’re sort of learning how things work, how to draw different parts of characters.

There’s a lot of copying, biting, people don’t realise when you’re doing it, but people will see it.

I think always in graffiti, people have copied like famous comic books and I don’t really think it’s biting; it’s always been that way ennit. I think it depends if you’re interested in making up your own, it’s always good, even now when I’m doing illustrations and shit, I use references.

Do you enjoy doing the illustration jobs, that’s your main income, right?

Yeah, graffiti commissions, and illustrations and any kinda drawing.

Do you think that kinda takes the fun out of it?

Yeah a little bit, I think it can sometimes when constantly doing stuff to brief, but it depends on the brief. It’s alright if they want it in your style or like your ideas, but like when they’ve got a firm idea of what they want with no room to be creative it’s not so fun. But sometimes you’re lucky.

Like Original Patty Men, using that as an example, that must have been pretty good, do whatever you like, but have it burger orientated?

Yeah, it was good to have free rein, plus because they’re mates of mine, so it was just good doing drawings for your mates. I painted a mural on their wall too. I didn’t even charge them.

I don’t even eat meat, I got a few free mushroom burgers, that’s what they gave me. The best mushroom burger I ever had though, from what I hear every burger they do is amazing like. Best burgers in Brum.

Most of your stuff is character based, right?

I used to do letters, growing up I thought it was important, looking at like the JEPSY book I think had not long come out, and then seeing people who had done letters and characters, to me I thought it was quite important.

I’ve kind of spent my graff career watching you, so I’ve seen your style evolve from doing like proper graff characters to what it is today.

Yeah yeah, I just think your interests change, stuff that you look at  and especially going to uni, they didn’t really teach me anything technically, when I got there I was a mature student, and all the other kids had done foundation courses, and had actually been shown different techniques and how to use certain materials. I think what I got out of it was how to look at how I create images and why.

Tell us about your dog? You’ve always done pictures of animals, and when you said you had a dog, I knew exactly what kinda dog you were going to get.

Yeah, a Boston terrier, I’ve wanted one for about 5 years, his called Winston, after Winston Churchill. There’s probably a lot of people who don’t like Winston Churchill, but I dunno, I like them both. He poos a lot and sleeps which is good, kinda like me.

So what about influences, and influential artists, anybody that sticks out?

I think the more I look at Etam Cru, SAINER and that BEZT, they bring concepts and reasons to why they do a lot with their murals, just by giving them a title. I think sometimes where the murals are located affects what they paint. I like that approach, it gives them a reason to be, other than just to look good.

They paint quite large as well, is that something you want to strive to do?

So tell us about your little run-in with the law recently, how’s that?

Bit shit for a legal writer…

I know yeah, I was just painting in this factory in Digbeth wasn’t I, and apparently network rail own the property, so it was the BTP that turned up, but then as soon as they saw me, I was expecting them, that’s why I never ran away because I thought they would be like ah your just painting some shitty old factory, just clean up your shit and go away. Instead, they arrested me for burglary, kept me in the back of the car until they got a warrant, drove me to New Street station to get evidence bags and then drove to my house, and yeah just raided my house and took all the stuff I needed to make a living from. My computer, my paint, my camera, and my phone.

Yeah, but it turned out alright in the end, I think it’s how you deal with the police can go in your favour, no one likes the police, and they’re not your friends as much as they pretend they are, but if you’re civil with them and just talk to them in a normal way without incriminating yourself then they will react to that, but if you’re being a cunt to them, then they’ll go out their way to just be fucking horrible to you.

Easier said than done! right think that’s it, anything else you’d like to say?

Got anything to say to the young aspiring artists out there?

Yeah, stop doing shit paintings where I can see them.

Also, don’t sell yourself short. If people ask you to do a job for them, but then say they can’t pay you what you’ve asked and say “but it will be great exposure for you” or something similar, fuck them off because they don’t respect you or what you do.

And try to be humble as much as possible, remember that you’ve always got something to learn and try to push yourself as much as possible. There’s no such thing as a perfect piece, but it’s the constant pursuit that will help you progress.  Just try to have fun, which is also easier said than done.