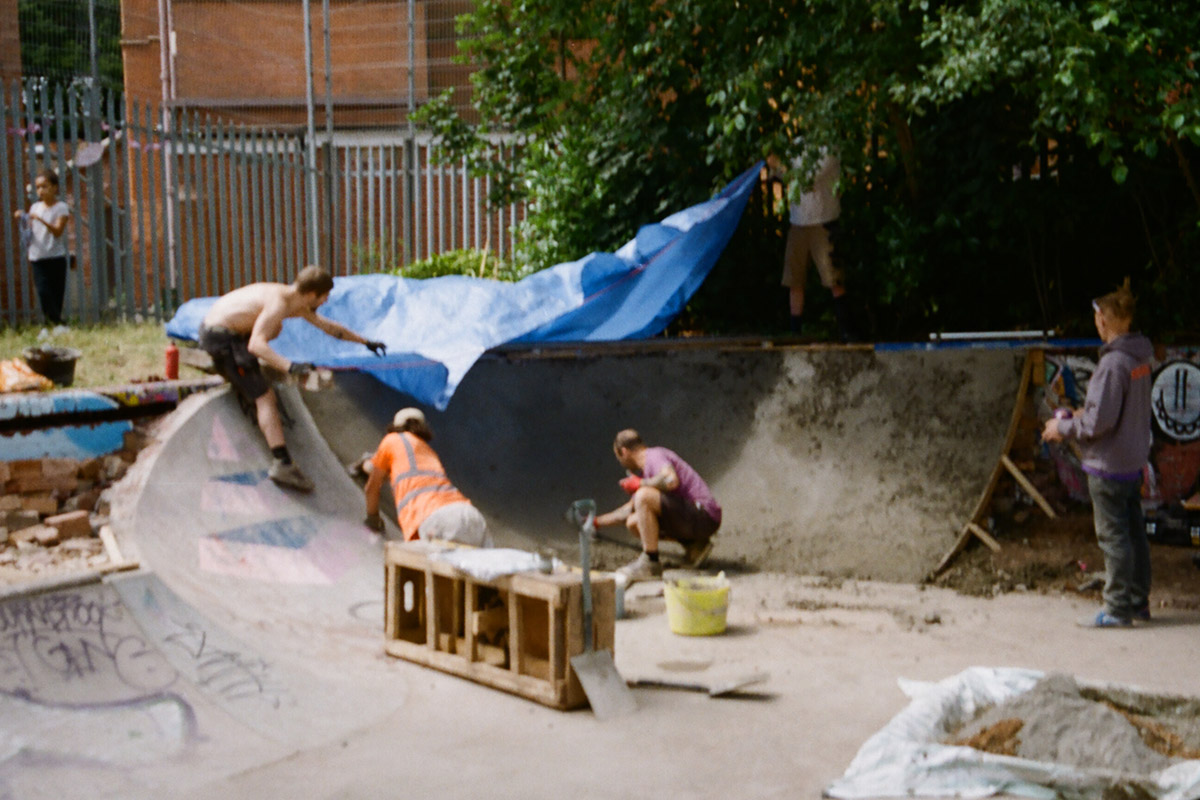 Every city has their skate scene, some more prevalent, others more surprising – each of their success dependent on their access to ramps, curbs, parks, boards and friends.

The pavements were no longer paved in gold, the younger generation had no one to look up to and so, the scene persevered and survived for over a decade through Ideal skate shop – in it’s many incarnations – and a small circle of dedicated skaters.

But when lockdown came, as many stories seem to go this year, the scattered community found their way back to the city, armed with revived passion and ample time to ignite the scene once again.

Selly Oak residents and students of Birmingham will know the space behind Aldi on Bristol Road, also known as Bournbrook, had been overgrown and disused for years. The basketball courts chained up and in a state of disregard — it’s a popular spot for graffiti writers in the city, but the site hadn’t seen community action in years.

However, skater and innovator, Shaun Boyle, saw the potential in the Bournbrook spot and had the vision for a project. They began working on the Bournbrook DIY skate park in May 2020 with a thorough brush of the rectangular, concrete ‘play area’ and the addition of a few ledges. The area has now transformed, through hard graft and team effort, into beautifully carved skate ramps and a thriving and expanding community.

A core team of experienced skate park designers and constructors have helped regenerate the wasteland and bring the project to life. James Hemming [Hem] and Tom Galway, who first apprenticed with Hem, have built skate parks for a living around the world. Paired with professional carpenters, knowledgeable skateboarders and the help of an invested community the space is unrecognisable in a matter of months.

Using the power of social media to spread the message, a little imagination and bucket loads of DIY spirit, Shaun has created momentum and raised £2,895 (of a modest £5,000 target) through their Gofundme page — enabling them to purchase building materials and make the project tangible.

Calling on the community to spread the load at build weekends, they’ve made light work of the heavy lifting, brick breaking and cement mixing. With 9am starts and no slacking in sight, BABMAG rolled up their sleeves and got stuck in back in August — the sun was shining and it was a joyous occasion fulled by music, tea, coffee, breakfast, sweaty smiles and high spirits.

Bournbrook goes against the stereotype of cool, clique-y skate crews and is more inline with the open hearted mentality of Birmingham. The build weekends and the park itself provide a space to engage with good health, both physically, mentally and have created a priceless asset to the city.

Despite the changes in weather, the energy hasn’t ceased and the rate at which the park is being built is remarkable. With a resourceful attitude and loving donations, Bournbrook is much more than a skate park, it’s a community hub for all to chip in and share their skills, whether it be planting trees, making teas or rallying the troops!

The crew is growing too, Brum Girls Skate have made their mark and hold meet ups at the park. Kris Vile has started teaching all ages and abilities and the inclusive nature of the park can be felt through the environment and attitudes present.

However, as tales seem to go in Birmingham, the Council weren’t the most supportive of the Bournbrook DIY skate spot at first. Having visited the site and engaged in conversation with the DIY organisers, the Council held reservations about letting the land go to community use.

Health and safety, liability and land usage were major concerns for them which lead to the area being fenced off and halted progress for a period. A petition was set up to show the ‘powers that be’ that the park is a worthwhile use of the land and the impact of creating such a space would have far reaching, positive effects.

From the beginning, the people behind Bournbrook wanted to work with the Council to ensure the space could stay forever and be used by as many people from our diverse city as possible.

With good communication comes success — last month the DIY skate park was granted the official go ahead! A massive win for everyone involved and testament to the determination and motivation given to the project. Bournbrook marks the first DIY skate park to be recognised by the Council in Birmingham and we hope the first of many community projects to give new life to disused spaces.

Now registered as a Community Interest Company, the park can apply for funding and grow the scene and positive social impact even more. If you haven’t visited the spot yet, it’s a welcoming place to hang out, make friends or learn some new tricks.

We can’t wait to see what next year holds for the Brum skate scene – they have already shown what incredible things can be achieved when people put their heads together and create the change they want to see.

Bournbrook still needs your support.
Please donate if you can here: www.gofundme.com/f/bournbrook-diy-fundraiser
Show your support on Instagram: www.instagram.com/bournbrookdiy/ or get down to a build day in the future!