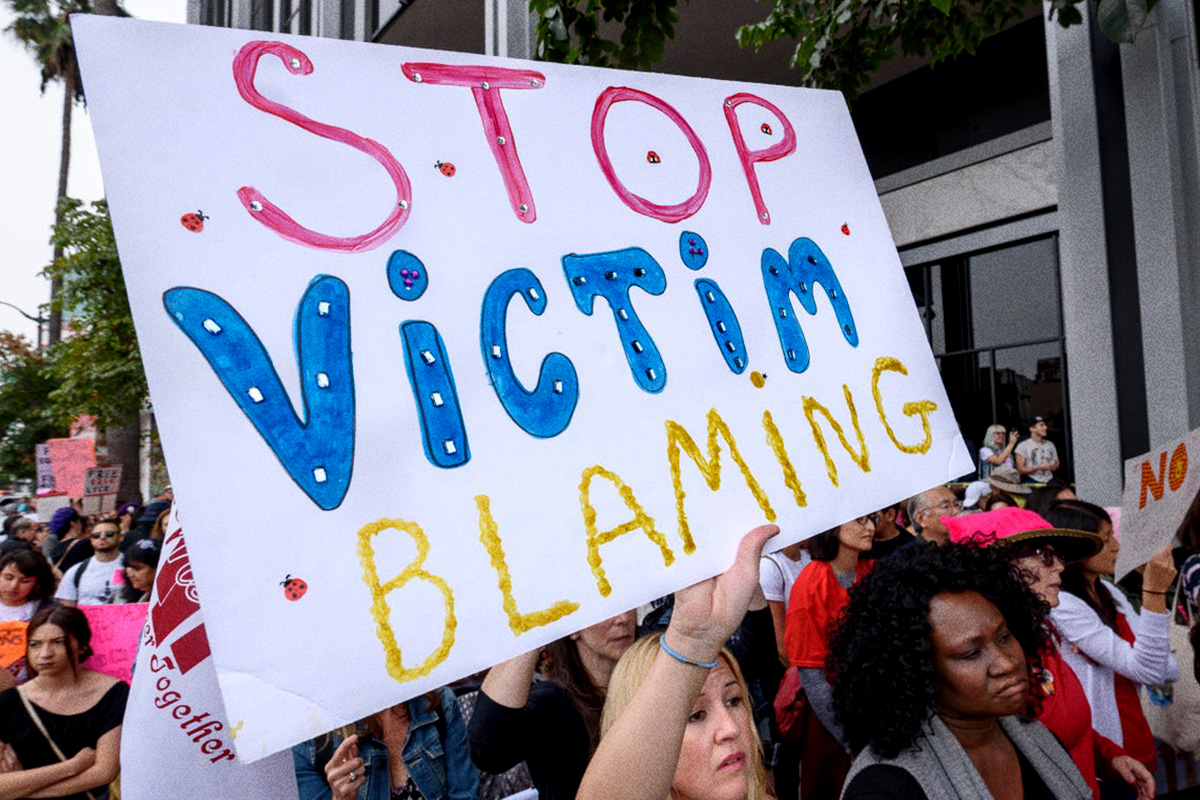 Blame Culture, Consent and the Divide in Convictions

Sexual violence and consent is not an easy topic to bring up, but the debate that surrounds it is of the most essential conversations you can engage in for women right now.

In the UK, the official statistic shows one in five women will experience sexual violence in their lifetime, this rises to one in three globally. But as more and more women are speaking out, this number could be way off the mark.

But what do we mean when we say sexual violence? To put it simply, a sexual act becomes unlawful when it is carried out without the other person’s consent.

There’s no international definition for the varying degree of sexual offences. To overcome this problem, the European Sourcebook created a standard definition, which is “rape means sexual intercourse with a person against her/his will (per vagina or other).” Countries were invited to follow this definition as closely as possible.

But now flawed by it’s outdated (1999) definition, as it excludes sexual assault only recognising sexual intercourse, it perpetuates a dangerous culture of victim blaming due to lack of education and clarity on the complexities of sexual assault across the globe. Women’s fear of not being believed and uncertainty of whether what happened to them was unlawful, is confirmed time and time again as we see courageous survivors seeking justice frequently failed by society.

We saw this unfold on Twitter last month when a plethora of celebrities were accused, to varying degrees, of sexual assault. Many victims chose to speak out anonymously and created a second Twitter account to avoid using their known name out of fear of receiving hate.

Hundreds of users responded to these allegations, asking questions such as “why couldn’t it have been me?” or telling the victim they should be grateful someone so famous would even think of touching them. These comments, mostly coming from celebrity’s die-hard fans, paints the picture that a victim’s sexual assault story is something to be proud, or grateful for, but this couldn’t be further from the truth.

“The victim in this case, although she wasn’t necessarily willing, she didn’t put up a fight” – Judge Derek Johnson (2008, USA)

It’s not just those in the public eye who are being called out. Women are bravely sharing their experiences, naming and shaming men in their local area, universities and places of work, to bring to light the wrongs they have experienced, hold the abuser accountable and warning other women who may come into contact with them.

People have been shocked at the amount of women who have spoken out in such a short time. Some, having seen the high volume of accusations, suggest that women are only speaking out to jump onto a trend.

What they fail to recognise is that it often takes movements like these for some girls to realise what they have been through – but time does not devalue their experience. It can take time to come to terms with a traumatic experience and it can take even longer to be brave enough to speak out.

“As the gentlemen on the jury will understand, when a woman says no she doesn’t always mean it. Men can’t turn their emotions on and off like a tap like some women can” – Judge Raymond Dean (1990, UK)

Less than 24 hours into the movement, misogynistic Twitter users had already put the whole movement down to people looking for something to do while stuck at home.

Some accused celebrities were quick to be “cancelled” by Twitter users, but is this enough to for their wrong doing? Is it too much to ruin their career? Cancel culture is a toxic, but arguably necessary, cloud plaguing debates, some people say that it must take place in order to hold people accountable for their actions and see change. SLAG Mag covered this recently and we think touches on some good points.

People were quick to call this a movement. But not before we all bore witness to the horrific side of speaking out – victim blaming. After a couple days, the false allegations took the limelight, victims stopped coming forward and accusations came to a halt.

Figures from the British Crime Survey show that at least 1 in 4 women and 1 in 30 men will experience rape or a serious sexual assault at some point during their life. But for every 1,000 sexual assaults that occur, on average only 394 get reported and a mere six cases will get convictions. In England and Wales, just 1.5% of reported rape cases lead to a suspect being charged.

“This was a rare sort of rape. It is not like someone being jumped on in the street. This is within the family and does not impinge on the public” – Sir Kenneth Jupp, (1987, UK) a judge who gave a man a two year suspended sentence for raping his ex-wife.

The statement in itself is completely untrue as 34% of sexual violence victims were assaulted by a partner or family member.

Victim-blaming comes in many forms and is often subtle and unconscious. It can apply to cases of sexual violence, but also other crimes. Anytime someone defaults to questioning what a victim could have done differently to prevent a crime, they are fuelling the culture of victim-blaming.

The World Just Hypothesis in some ways explains the psychology behind victim blaming – it’s our natural, psychological first reaction to crime. As a society we have a strong need to believe that we deserve our outcomes in order to see the world as fair and just. Holding a victim responsible for their misfortune is partially a way to avoid admitting that something just as unthinkable could happen to you, even if you do everything ‘right’.

Victim blaming can easily be fuelled by the lack of conversation surrounding consent.

Consent is an easy concept, a simple yes or no, right? Yes, this is the most basic way to explain consent, however, it oversimplifies actions that can also mean no.

Consent is broken down in the UK as;

You cannot consent to participate in any sexual act if you are below the age of 16.

Consent comes from a place of enthusiasm. Rather than looking for a no, make sure there’s an active yes.

Consent must be given without pressure. It’s not okay to trick, coerce or threaten someone into saying yes. Coercion can cover a whole spectrum of degrees of force. Apart from physical force, it may involve psychological intimidation, blackmail or other threats – for instance, the threat of physical harm, of being dismissed from a job or of not obtaining a job that is sought.

You can’t give consent if you’re unconscious or in an altered mental state such as being drunk or high, drugged, asleep or mentally incapable of understanding the situation.

You can only consent to something if you have all the facts. For example, if a partner says they will use protection during sex, but they do not, that is not consensual sex.

You are entitled to consent to one thing and not another. You can consent to kissing or touching one day and not the next. What you agree to is up to you, and it is allowed to change.

Consent can be revoked. You can change your mind at any time.

“If ONE white woman accused me of rape, my career would be OVER. A white man accused of tape by TWENTY TWO women being able to run for a 2nd term as POTUS (President of the United States), with half the country still supporting him is all you need to know about racism, white male patriarchy and white supremacy” – Bishop Talbert Swan

In 2016, the National Registry of Exonerations released a list of 1,900 American defendants who were convicted of crimes and later exonerated due to their innocence being proved. This list showed that a prisoner serving time for sexual assault is three-and-a-half times more likely to be innocent if he is black than if he is white.

The list also showed that black sexual assault exonerees received harsher sentences than white exonerees for the same crimes: 28% were sentenced to life imprisonment compared to 17% for white men. The average minimum term for those who were not sentenced to life was 29 years for black defendants and just 19 years for their white counterparts.

“If a women is wearing provocative clothing, the change needs to come from her” – Ahmed Mahmoud, a policeman in Cairo (2014, USA)

It’s not just a racial divide in convictions either. There is also a class divide growing ever present in the conviction rate of sexual violence cases. Middle class men often receive lower sentences, if one at all. (Perhaps, so their promising futures aren’t compromised by their mistakes.)

“I hope you’ll be able to keep your well-paid job and the couple of weeks you spend in prison will be treated by employers as part of your holidays” – Judge Gabriel Hutton (1988, UK) speaking to a guilty rapist.

It is important to observe that this treatment of women is systemic and incredibly deep rooted in our society. Without changing views, changing the outcome will be impossibly difficult. It’s no secret that the way both the UK and USA prison system’s are run is outdated and ineffective. Focusing on punishment instead of reform will change nothing for serial offenders.

We must work on educating boys now so they avoid the prison system altogether. Educating all genders on what consent means will be an effective way to not only allow people to acknowledge when sexual assault has occurred, but will also set the clear boundaries to help reduce the occurrence of sexual violence.

If you’ve been affected by sexual violence or think you may have, we have listed some charities where you can seek guidance and help.

Rape Crisis England and Wales – is a feminist organisation that focuses on sexual abuse in the UK and promotes the needs and rights of those females who have experienced sexual violence. They are dedicated to improving services available to help and support them and ultimate aim is to eliminate sexual violence completely in the UK.

Safeline – works towards the prevention of sexual abuse and to help support those who have been affected. They provide a wide range of services including: Counselling services, via phone, online, or face to face. This includes therapies like drama or art therapy.

Survivors UK – is focused on helping male victims of rape and sexual abuse. Based in East London, their services include a national helping, individual counselling, and group counselling sessions. They also offer training to those organisations that are working with adult male survivors of sexual abuse.

As individuals, we must continuously be educating ourselves on what we can do better. We must be the change we want to see.