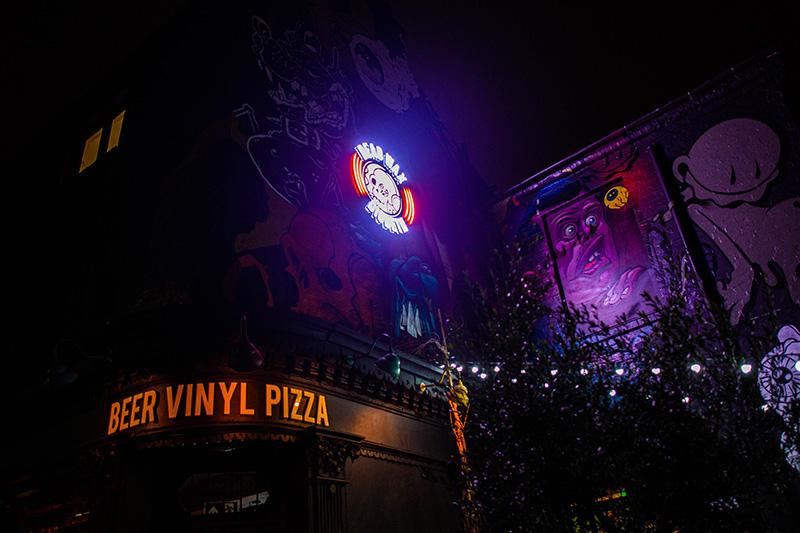 120 bands, promoters, journalists and artists have spoken out about Carlo Solazzo, director of Birmingham Promoters, since the beginning of June.

Yet, there is still no statement from either Carlo or Birmingham Promoters to address the boycott and the allegations of sexual assault.

It appears that instead, both Carlo Solazzo and Birmingham Promoters have elected to remove their internet and social media presence for the time being.

However, the only music venue who has currently put their name to statement, joining the boycott is @monasterydigbeth.

Full coverage of the collective statement can be found here.

Amber, from Girls at Bars; a non-profit organisation which provides protection for women working in the hospitality industry, on nights out and at gigs said: “There just needs to be zero tolerance. When someone is accused of something so serious, should they be allowed to operate within a space like this? If a school teacher was accused of something like this, would they be allowed to keep their job? Why is this any different?”

Carlo Solazzo recently received two separate amounts of funding from Arts Council England for Birmingham Promoters. When asked to comment about whether the boycott would impact Carlo’s funding, an Arts Council spokesperson said;

“BPL Events Limited made two successful applications to the Government’s Culture Recovery Funds through Arts Council England. In round one in October 2020, they were awarded £77,173 and in April 2021 they were offered an additional £38,586 in the second round.”

“We take any complaints we receive very seriously and investigate to ensure that public funds are used and distributed fairly. I confirm that we have received a complaint from a member of the public about BPL Events Limited which we are now looking into.”

Carlo Solazzo’s career as a prominent member of the Birmingham music scene and director of Birmingham Promoters began in 2010, with shows at Hare and Hounds and The Bulls Head. Carlo also had contracts at The Rainbow Venues between 2016-2017, The Flapper and Mama Roux between 2016-2018, as well as the o2 Institute and o2 Academy on occasion.

When asked to comment about the Birmingham Promoter boycott, owners and management at Mama Roux’s confirmed they would not be working with Carlo Solazzo again and said: “We haven’t worked with him since 2018. I think that’s says it all.”

One member of the Birmingham music scene, who has worked with Carlo on multiple occasions said: “Carlo was very I’m here now, I’m in charge. He would put me in awkward situations, essentially it was Carlo is lord of the land and he gets to do what he wants.”

A past employee of Carlo, who worked at Birmingham Promoters also commented: “There was a general lack of respect for women with inappropriate comments of a sexist and misogynistic nature being made on a regular basis.” Both were determined to remain anonymous.

Up until very recently, Carlo was also the main promoter at Dead Wax Digbeth, a music venue which was subject to protests in 2019. Despite these protests Laine Pub Co, who supervise Dead Wax alongside a number of other pubs across the UK, was not informed by Dead Wax management about the allegations against Carlo Solazzo. That is, until March, 2021.

When asked to comment, Laine confirmed that they will not be working with Carlo Solazzo in any capacity in the future. Laine also confirmed that Carlo’s presence had since been completely removed from Dead Wax. They want to stress to the Birmingham scene that: “Laine is absolutely committed to making sure Dead Wax feels 100% safe for all women again.”

“The allegations against Carlo Solazzo have sent shock waves through the Birmingham music scene. We all want to offer safe spaces for our artists, staff and customers, so while these allegations are being investigated, we made the decision to stop working with Birmingham Promoters.

The process has not been an easy one with several complications along the way, but we now have just two of 10 shows left to be formally transferred to different promoters. It was always clear that the artists needed to keep these dates on their tours, so we made the decision to try our best to keep their shows in the diary.

We have always been passionate about providing safe spaces for people at our venue and others we work with. Our involvement with Not Normal Not Ok is starting to see some really positive outcomes. There will be some announcements very soon about city-wide initiatives to train venue staff and promote clear messaging around these issues. It’s vital that we come together as a scene to make our message unified and clear. Sexual violence, harassment and abuse will not be tolerated by anyone.

“The Hare and Hounds stand 100% with the victims.”

The Sunflower Lounge, The Actress and Bishop and The Castle and Falcon, are yet to address Carlo’s continued presence in their venue, despite the Birmingham Promoters boycott.

Ed Quigley, who worked at the Sunflower Longue between 2016-2018 said:

“When working at The Sunflower Lounge I heard all sorts of allegations against Carlo and witnessed his sleazy attitude towards young woman myself. Unnecessary handling, groping the waists and lower backs of artists he was working for and then threatening their careers or exposure should they not respond well.”

“The rumours of sexual assault allegations certainly seemed to match the kind of behaviour I saw. It was almost like a joke when I first heard about them, but then when I started seeing him behave that way, I asked some more people and quickly found out he was a real threat. After hearing so many allegations it becomes indisputable.”

As venues cut ties with Birmingham Promoters and more people speak out against Carlo Solazzo, it is difficult to see how either will recover without first addressing the allegations.

It remains to be seen whether all venues in Birmingham will join the Hare and Hounds and Dead Wax in standing with survivors, or whether they will continue to associate with Carlo Solazzo.