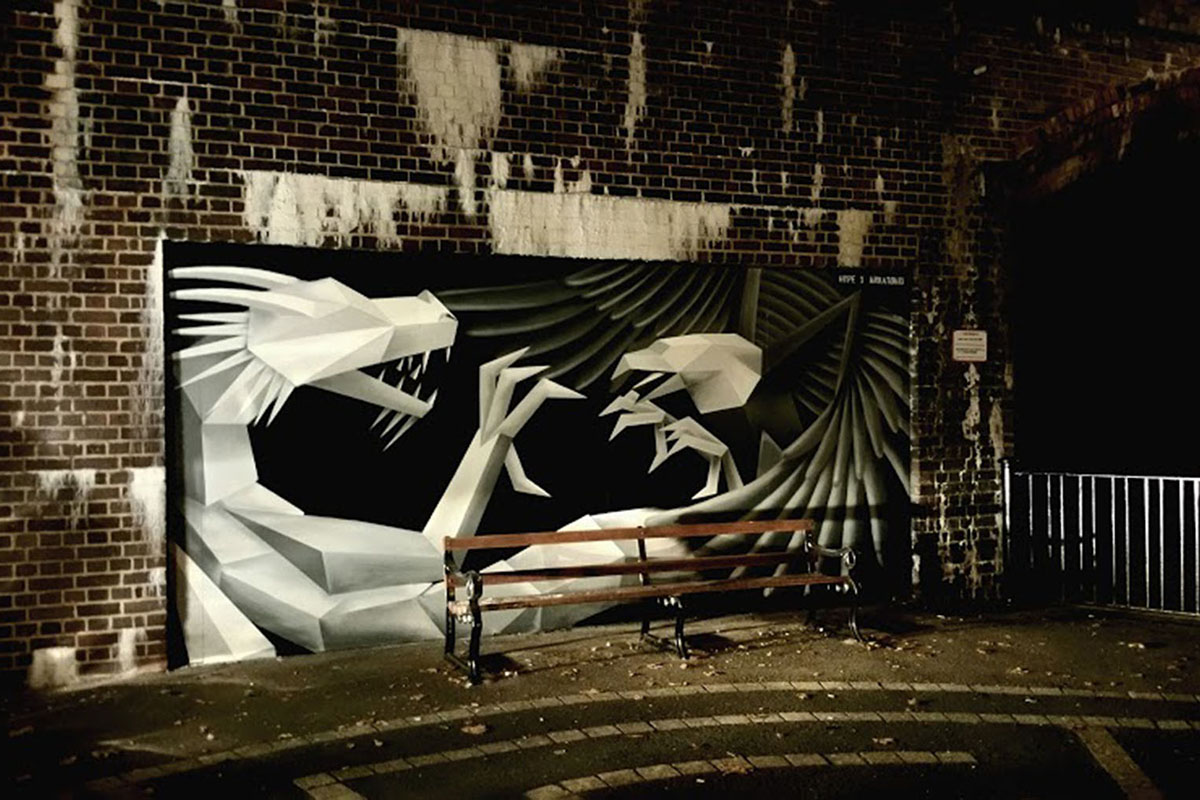 Geometric animals, cosmic inspired murals, fallen legends portraits, and psychedelic mysticism all make up Annatomix works of art. She has steadily gained a hardcore fan base allowing herself to achieve her goal of setting up her own business and getting screen printing equipment with the help of a Kickstarter campaign.

Her work links to spirituality through use of sacred geometry that warps the notion of space and time creating her own universe around us. Annatomix is completely self-taught and has gained notoriety with her street art murals around the city. She has an urban style, linear and mathematical that also links to the fluidity of the mind and nature. It’s this mix of angularity and beauty that makes her work stand out from the crowd.

What are your views on the support systems for artists in Birmingham?

I think if you’re a student or you’re just starting out, there are a wealth of organisations and events in Birmingham and the rest of the Midlands that do support artists in various ways. However, once you get to the point where you want to build a career as an artist, it’s just not there. You have to branch out (go to London etc) – which is certainly a good thing – but  I think it’s depressing how few paying jobs there are available within the Midlands. Birmingham on the whole still seems quite dismissive of it’s own culture while busy trying to emulate that of other cities. It’s a bit odd. We have talent by the bucket load in this city – artists of all kids – but we don’t give it the room to grow to maturity. The council, and the rest of us could do so much for this city by utilising the talent and culture we already have. This magazine, as an example is a great step forward in giving us a collective voice but we have to get the artists, the public and the council behind these projects if we want them to survive.

You recently created a Bowie piece that got support from the local council who helped you find a public space to display it; should the local authorities be doing more to help showcase artists?

Absolutely. If there’s one city in this country that could do with a massive dose of public art, it’s Birmingham. I love this city and it is incredibly colourful in many different ways but on a grey day, it can be a very gloomy place. Better use of public art could change that in a huge way, if the local council can acknowledge that modern public art / street art is hugely popular, and truly effective use of it could work wonders for the local economy as well as giving paid jobs to local artists.

Good money-spending members of the general public take time to visit Birmingham to see our beloved, world-renowned graffiti and the council spend a fortune buffing it.  I look at all the hoardings hiding the constructions sites, the vast amounts of glass and big, grey concrete walls and I see a massive canvas just waiting to be utilised. And not just on the outskirts or in one corner of the city but all over it. Obviously, I have a slightly biased point of view but it seems like a no-brainer to me.

We artists need to be more proactive too. In this line of work, you can’t sit around waiting for opportunities to be handed to you. You have to be out, hunting them down or creating them for yourself. I wanted a public wall in the city centre for Bowie so I went out and asked for one. Big thanks to Southside Birmingham for being so supportive.

You’re currently doing a Kickstarter and smashing your goal, how did that feel getting so much support from your peers?

A bit overwhelming, considering I’d given the Kickstarter 60 days to raise the original £750 target and I hit it within the first 24hrs. The project ended a week ago at 430% funded and I’m not sure it’s really sunk in yet. I just want to hug everyone.

Would you recommend the Kickstarter process to other artists?

I would recommend working long and hard at building a fan base, client list and a good reputation and working even harder at your craft until you are confident that you have the nescessary support. And then do a Kickstarter.

Has monochrome and geometric always been your style?

Pretty much. It’s a product of what inspires me.

Where do you look for inspiration?

Everywhere! but most of what I’m doing at the moment though is heavily inspired by all the books I read and documentaries and films I watch. Philosophy, religion, history, mythology and science / science fiction are my prefered subjects. The link between science, theology and philosophy has been the main theme of my work for the past 5 years.

We have seen small intricate pieces to large murals, which do you enjoy creating the most?

I’m happy as long as I’m making art but my favourite surface will always be a massive wall. I can easily sit in my studio and paint tiny things, taking on a large scale mural is a rare challenge. It’s been nearly 2 years since my last really big wall, for Bournemouth Council. I’d love to something on that scale here in Brum.

I’m excited about everything right now. The Kickstarter campaign will be keeping me busy for a while but I’ll be painting at several of the art festivals around the country this summer including my 4th year at NUE Arts Fest in Tamworth. I’ve got a lot of projects and exhibitions going on in London and elsewhere throughout the year and hopefully, one or two jobs in Birmingham as well.