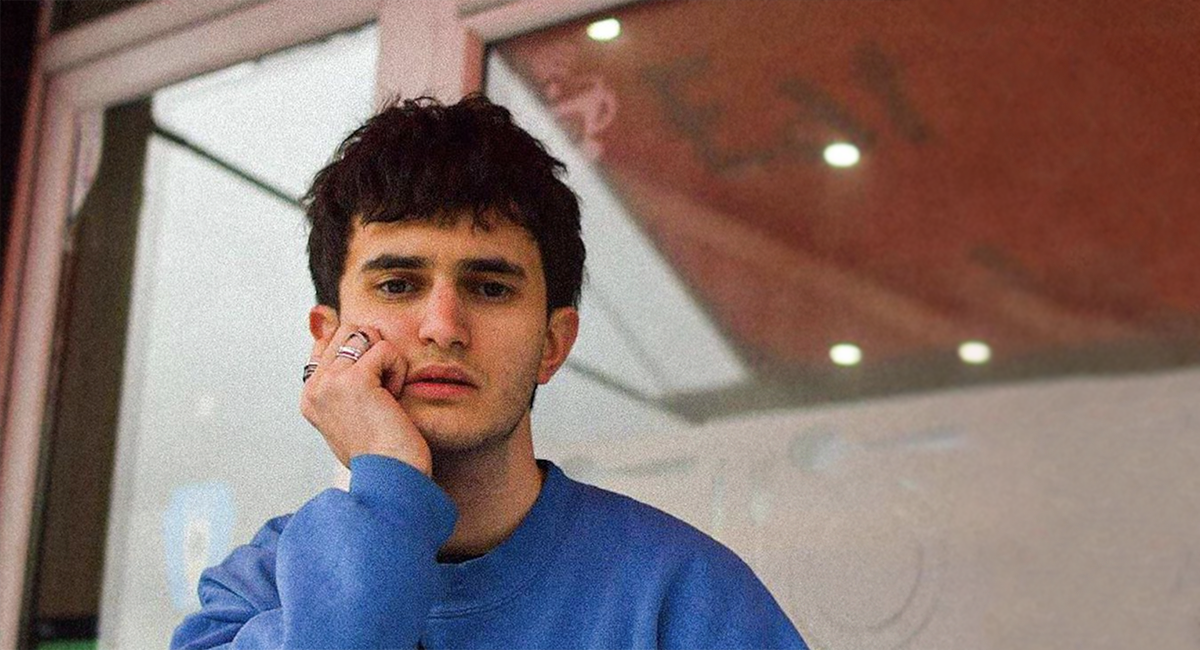 An Interview with The New Consistent

The Birmingham music scene has seen a buzz of new releases lately despite the pressures that lockdown has placed on us all. Ben Ramsay aka The New Consistent has joined this growing list of artists pushing their art form by announcing his latest project; Turn Off All The Screens.

We caught up with Ben to discuss both his music and his goals for the future.

Your name suggests a personal belief or a story, is there a backstory behind The New Consistent?

Yeah so this whole thing kind of started at a massive time of change in my personal life about 2 years ago, so I was writing a lot of songs to get my emotions out, one of them being the debut single which mentions the phrase. In that context, I was talking about a new consistent in my lifestyle. Everything around me was changing as relationships failed to materialise and new ones grew, and so it was about me questioning it all. I then needed a name for me as a musician and One of my mates suggested ‘the new consistent’ after hearing the song and it all seemed to fit together!

How long have you been making music and how has your songwriting process been affected by the pandemic?

I’ve only really been writing for two years so until recently I was still finding my style, the first song I ever wrote was 3 Years! The pandemic gave me so much time to write that I really hit my groove and found my style. I was on the way to finding it before lockdown but having that much time just sped up the process and made everything click. I had new emotions to write about and being able to focus solely on that really benefitted me in that sense.

By being a spoken word artist, how do you come up with your lyrical ideas, and did you find it challenging when you were first writing songs?

The style I write in now came really naturally to me for some reason. Like when I first wrote 3 Years, it just felt normal and it was then that I first had the feeling of ‘I’ve written a song here’ and i remember feeling like it was the start of something, so it never felt a challenge – and it’s certainly felt more and more natural with each song I’ve written as I’ve progressed with my style. Lyrical ideas just come straight from my emotions, 95% of the time I write in-the-moment, I never have to force anything. I’m not one of these people that makes myself sit and write every day. I wait until it comes to me and then I usually end up writing a whole song there and then in an hour.

As for lyrical flows, and rhyming patterns etc I take direct inspiration from the people I listen to at the moment, and if you listen to my first song all the way through to my latest tape you can hear how my influences have changed!

You’re based in Worcester, how has living there shaped your music?

Yeah… so I spent my time there between ages 11-18, and have been in and out of Birmingham before and after that. I think when I was younger, being in the West Midlands was great cos we always had a gig to go to each week, and having that experience gave me the knowledge I need now to do music myself if you know what I mean? You feel part of a scene as a fan at 15, and so you when you become the musician at 18 you have the knowledge of both sides. Also, the West Midlands is the perfect size cos I feel like everyone knows each other from somewhere, and I like that. Like there are people I went to school within Worcester who are in the Birmingham music scene and I find that cool to watch and be a part of myself.

Did you find yourself having more ideas during lockdown or did the isolation shift your emotions in different directions?

I went through phases. At the start, I was finishing planning for this release campaign that’s starting at the minute and so was really busy every day, then once I’d finished that I had a lull where I lay in bed and did fuck all for a few days. But cos I like to be strict on myself with my routines and work ethic, I was always trying to find new ideas to keep my mind sharp which is how the remixes mixtape came about. And then I was busy with that for a while and came up with loads of ideas cos I knew I needed to. I just kept trying to not let my brain become lazy, cos I knew once I dropped off I’d drop off for a while and it’d take me personally a lot of time to get back up with my own standards of productivity. I used the feelings during felt isolation to fuel others within myself I guess!

Having listened to your two EPs, it’s clear your influences are varied but who would you say influenced you the most?

I could never nail it down to one artist, so I’ll say a few. Loyle Carner and Rejjie Snow songs are probably the most in terms of musicality. A lot of the Kaytranada beats too. But lyrically a lot of Dave’s stuff is infectious – the way he tells a story is unrivalled. Kofi Stone in Birmingham has given me some inspiration recently, as has Jesse James Solomon. It’s always changing, I used to be more ‘indie’ when I was younger and I still keep an ear out to certain artists from that side of things. 1157 and Sugarthief in Birmingham always impress and inspire, and there’s this new artist called Bruv from wolves who everyone will no doubt hear about soon. He’s been sending me some unreleased tracks and I can’t stop listening.

What is your musical background? Do you produce your music or do you collaborate with different producers/artists?

Obviously, the first EP was produced by Ozzy from Swim Deep but that was 2 years ago now and as I’ve done more of my own production my sound has changed from that. Sometimes I collab and to be honest I love doing that cos I’m stronger lyrically than producing, but all the songs on my upcoming EP were produced by me. EP3 will most likely consist of more collaborative tunes as I’ve met and connected with more people! I’m never strict with it though, I’m working on so many songs and projects right now that it’s hard to keep track of what I’ve done on each and who’s produced what, I guess it doesn’t really matter when you’re making music as a ‘solo’ act like me. If the tunes good and I’m on it I’m dropping it!

You have approached your visual side of the music with a lofi/vintage feel. Do you design your own artwork or do you work with someone?

For the music sleeves, I’ve designed them all. I don’t really like any of the old ones now though hahaha, my graphic design has progressed a lot more since I made them. But yeah I feel that theme suits the music for sure! @by.belladesigns on Instagram helped me with a few posters for gigs etc at the end of last year and start of this one, and she inspired me quite a bit and taught me a lot! All the posters and artwork for the next releases was by me now though, mostly using photographs taken by my mates @andrew_busby_photo and @photosbybenjii on Instagram. Their photography is the thing that makes the theme work for me right now!

Your new single “Turn Off All The Screens” is a mellow track reflecting on anxiety and stress. However, the opening line “In a video game if you see a bad guy, you know you’ve gone the right way” also suggests hope for the future. How did this track come about and what emotions do you personally feel in the lyrics?

Yeah, it’s a really personal one, as always. I can’t really remember writing it to be honest I think it was one of those late night ones. It’s really old this song though, I think I wrote it back at the end of 2018. I didn’t get the chorus vocals off Charlotte till summer 2019 though – it was me singing them originally, but I wanted someone with the perfect voice to sing it which is why I’ve been sat on it for so long!

The song itself is just about my mental health at the time, I was going through the darkest patch in my life and it was just pure expression of that. I think lines like that first one is just me trying to reassure myself whilst I was writing. Straight from the heart vibes in it, I hope people can find some comfort in it themselves. I’m glad Charlotte sang the chorus, she really made the song for me, and lifted the emotions off the page way more than if I had just sung it. Although they were my words, she delivers them in a way that makes everyone able to relate, I feel!

You have a new EP coming out soon, can you tell us anything about this project and how the process has been?

I’m gonna keep some of it hush for now, but it’s been a long time coming! I had this mastered and ready to drop just before coronavirus came along! The songs for me perfectly encapsulate the direction I’m going in with my music and they have real, real meaning. I can’t wait to show everyone!

What are your thoughts on the Birmingham music scene and the wider midlands scene as a whole? Are there any artists you’d like to work with?

It’s good! The West Midlands is always thriving, whether places like London decide to take notice or not (although I think they are now, which is good). Some of my favourite artists are luckily now my friends too which is great. Birmingham has always had that family feel, because I think it gets rejected (wrongly) by other cities, we make sure we look out for our own. I’d love to collab with people like Kofi Stone & Sugarthief mostly, although they’re both active in different parts of the scene, they have some similarities and I feel musically they’re our strongest acts at the minute. Other favourites have been mentioned before, 1157, Bruv, Feet & this new band called The Head. I could go on and on…

As well as releasing the EP, what are your plans for the future?

To take it nationwide. I want to break through properly in Birmingham and then take it to other cities, and I feel this set of songs will hopefully open some of the doors for me to do that. I love being creative in areas other than music too, so you might catch me acting or doing some more art-based projects! But tunnel vision wise, I intend to end this year very strongly with this campaign, I’ve then got a couple of extras to start 2021 with, and then it’s time for a more lengthy EP with my third one, to really cement who I am. 2021 is gonna be so, so exciting!

Make sure you click the Pre-Save for “Turn Off All The Screens” by The New Consistent!