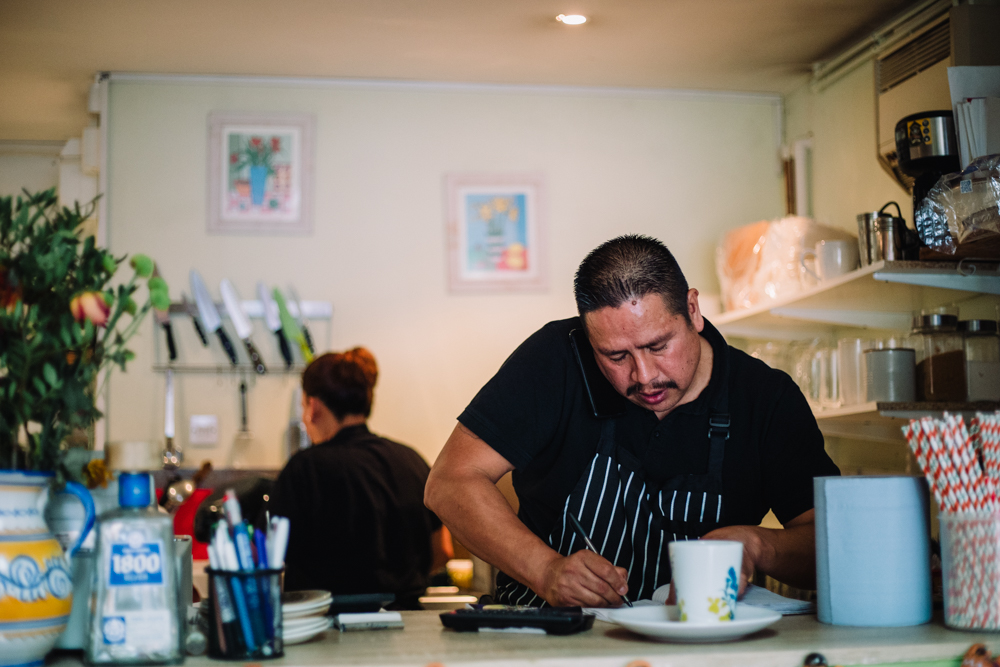 A La Mexicana, that’s how we do it!

I’d never had a fajita or chilli con carne until I moved to England. Everyone was expecting me to be amazing at cooking these dishes, but they were expecting authenticity in inauthentic places.

I’m a proud Mexican, I say it all the time. Every single chance I have I will inject some Mexicaness into a situation. We take our time to do things, we’ll say hi with a kiss and a hug, we’ll listen to what you have to say, and if you are lucky, you’ll get an invite to eat at our house. We didn’t win many wars, we didn’t conquer any countries, we tried to be peaceful. We have been invaded many times and our culture has been poorly stereotyped in TV shows … but you can’t mess with our food.

I don’t mind Tex-Mex as long as you call it what it is, Tex-Mex. Who doesn’t like burritos or nachos? I love them. But you see, the problem is when it’s called “Authentic Mexican Food.” A plate with some “El Paso” tortillas, melted cheese, guacamole with no salt, and blue corn tortilla chips to make it more instagramable is neither authentic, nor Mexican.

Seriously, you’ll never see that stuff anywhere near Mexico, not pozole made with sweetcorn (disgusting) or blue rice (slightly better).

I’ve tried Creole Mexican food, paneer tikka masala tacos, Kung Pao chicken tacos, and Buffalo cauliflower quesadillas. Birmingham is incredible for amazing windows into culinary creativity like this, they are colourful, experimental and playful but not the authentic Mexican deliciousness I want British people to experience.

Each year there are more and more food trucks and pop-up restaurants selling “authentic Mexican food” or “Mexican street food.” All of them sell the same three dishes, with the same ingredients, cooked in the same way, with nothing Mexican on it, except the fact that they are inside of a tortilla. They think it’s particularly novel when the tortilla is served fried.

In this day and age where fake news is condemned, I label these places as fake news sources, spreading misinformation about something so important to us, like food.

You can get many “traditional” ingredients online and try to recreate recipes as authentically as possible, however there is always one ingredient that is extremely difficult to get, and that is sazón.

Sazón means – the highest point of maturity of something – and it comes from the Latin «satĭo» which means “to plant something”. The word has since evolved to have gastronomical connotations, it now describes a pleasant taste in a dish.

You see, sazón is that magical touch constructed by tradition, memories, sense of humour, regionalism, and love. We all have sazón, some people more than others, not everyone is blessed!

Sazón is what makes your grandma’s frijoles with pork fat an infinite memory, impossible to replicate. It makes the freshly handmade flour tortillas with queso fresco a snack that melts your heart, slowly, little by little, able to take you out of your senses like there’s nothing else in the world.

I was so close to giving up my search until Quetzalcóatl sent me a sign.

I met José via Facebook, we are both in a group called Mexicans in Birmingham and Surroundings. For some reason I added him, I guess I was intrigued by his profile name, it was something like The Preacher and I thought… ok, that’s funny, when he uploaded a video of him preaching at church I finally understood the name.

Months passed, then one day he posted about cooking some homemade recipes. The queso fresco on tostadas got me straight away, with that particular classic orangey-red salsa, it looks lethal, but will only kill you with kindness. A warm breeze blew through my office and sent me straight back to my primary school days of buying some food at the Cooperativa during recess, “One tostada with salsa and a cup of coca-cola with some Rancheritos.”

We were happy, but we didn’t know at that time.

An intense parade of authentic Mexican dishes filled my Facebook, looking exactly like back home, providing nostalgia with every post. Pozole, Carnitas, Suadero, Mole, Flautas, Tamales, Sopes, Pan de muerto and if it wasn’t enough they made Conchas!

Jose and his wife Patricia “La Patrona” started A La Mexicana in Bearwood, but their story started a few years earlier when they moved to the UK seeking asylum.

José arrived in London around 2013, then moved to Luton and ended up in Smethwick, Birmingham. Patricia joined him after that with his kids and started cooking at their church events.

“We met a lot of people who didn’t speak English, so we decided to provide English classes to them. Asylum seekers, just like us, from Latin America, Sudan, Afghanistan, etc. Suddenly our small flat wasn’t big enough to host all of them, so we looked for help.”

Alongside their work with their church and refugees, they started cooking for their friends. The word eventually spread and they ended up cooking at events for around 200 people – that’s when things got real.

A La Mexicana started in February 2020 in Smethwick in the heart of Bearwood, you can find them at 175 Sandon Road, Birmingham. Like many other places, Covid caused them to close but once the first lockdown passed and the restaurant opened its doors, it had a huge resonance with the foodie scene in Birmingham. Suddenly the small cenaduria in Bearwood became an icon for authenticity, an epicentre of Mexican Culture, gaining followers from all over the West Midlands including celebrities like Brendan O’Carroll and Wolverhampton Wanderers player Raul Jiménez.

A comfort zone is a privilege that people away from their countries, family, friends, careers, don’t always get to experience, but José and Patricia represent the Mexican spirit – that warm heart always ready to help without hesitation.

They are not scared to open the doors of their house to make you feel at home. Their food is cooked with love whilst being respectful of it’s own tradition, it’s not ambitious but sincere, with the only purpose being to fill your heart and belly with happiness.

And that, my friends, is called The Mexican way.